What do #Zombies and #Snickers Have in Common on #Halloween? 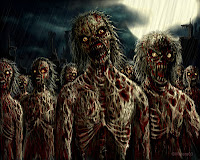 I love Halloween. I love everything about it: the costumes, the treats, the decorations, and trick-or-treaters. But most of all, I love the scariness that goes along with Halloween, which evokes images of fog-laden cemeteries or a full moon with eery, wispy clouds drifting over it to cast a ghostly light over the land. I instantly hear the telltale piano notes of the theme to the movie, Halloween, and I become all giddy like a little girl.

Halloween, even more-so than Christmas, makes me feel like a kid again. I just love it. And here's some interesting facts and trivia about Halloween that you may not have known: