My Own True Ghost Story 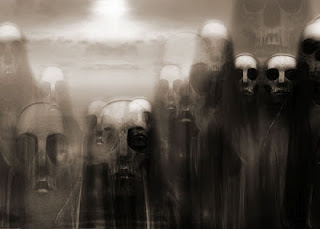 In my last blog post, I brought up Ouija Boards, which have the ability to open portals for spirits to use to walk between realms. While I've never seriously gotten down with a Ouija board, I have had experiences with ghosts. The following is a true story.

When I was a little girl, I shared a bedroom with my brother until I got old enough for my own room. We had bunk beds, and I got the bottom bunk. So, one night, I woke up and had to go to the bathroom. I can't remember exactly how old I was, but I was pretty young. Maybe eight or nine. I know I was in elementary school. At any rate, I opened the bedroom door and stepped into the hallway. When I looked up, I froze. A little girl was standing there looking at me. She was in vivid color, and I described the dress she wore as floral print because it was so colorful. She just stood there and looked at me, and I stood there and stared at her, terrified to the point that I was frozen in place and couldn't move. And then I think her hand moved or something. That's what snapped me back out of it. I turned and bolted back into the bedroom, diving head-first into my bed.

After several minutes, I woke my brother up and told him what had happened and that he had to go with me so I could go to the bathroom. No way was I going back out into that hallway alone. But when he took me out there, the little girl was gone.

A few years later, when I had finally calmed down about this mysterious little girl ghost, and when I had my own room, I was ready to talk to her if I ever saw her again. I had even grown so bold as to leave my bedroom door open as a means to invite her in if she wanted to talk to me.

One night, I was sound asleep and suddenly woke up out of nowhere. I wasn't thirsty, sick, and didn't have to pee. Nothing. I was just suddenly wide awake, as if someone had flipped a switch and I had gone from being dead asleep to wide awake in an instant. Not knowing what had awakened me, I remember sort of sighing and rolled my head over the pillow. My bed was positioned so that if I was lying down, I could look to the right and see out my bedroom door to the bathroom down the hall.

So, I had rolled my head to the right, and I was looking down the hall to the bathroom, and there was this faint glow. The bathroom door was opened halfway, and out from behind the door, this huge—and I mean extremely tall — hooded figure appeared. It moved around the door and began floating down the hall toward me. I say floating, because it hovered about 6 inches or so off the ground, maybe more. The robe was a greenish color, and the inside of the hood was black. I couldn't see a face or anything in there, but the robe billowed out and around as if feet were swishing it forward. I mean, the robe flowed as it would have if you or I were wearing it and walking around in it. And perhaps it could be described as more of a floor-length, hooded, cloak. 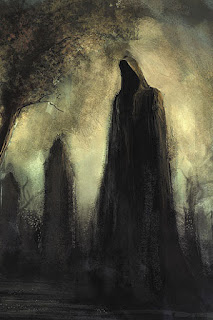 At any rate, this extremely tall figure came toward me, the top of its head passing through the door frame of the bathroom. I freaked. Again. This was no little girl, and I wanted nothing to do with it. But like before, I was frozen in place with fear. I mean, the little girl had just stood there, but this thing was walking, and it was walking toward me. I had to do something to make it go away, and I had to do it now. I threw off my covers and jumped out of my bed and "hid" behind my bedroom's door frame. I distinctly remember thinking, "If I can't see it, it will go away." Uh-huh. Yeah, sure. Shows how naive I was. The big and tall hooded creepy thing came into my room. It was seriously only a foot away from me, and even as I write this, I can feel the panic I felt then. I was petrified with fear.

The greenish, hooded, scary ghost entered my room, then began to turn toward me. I did the only thing I could think of. I sort of half-swatted, half-punched it. I don't remember feeling anything, but then again, I was beyond terrified. As I hit this whatever-it-was, it instantly disappeared, and I remember that it didn't disappear all at once. It sort of blew apart into what I can only describe as fabric-like swatches that quickly faded away.

Needless to say, I pretty much went into shock. I jumped back into bed, shivering, frozen scared, unable to move, barely able to breath. It was only by force of will that about a half-hour later I was able to dart to my brother's room and curl up in a fetal position at the foot of his bed and finally fall back to sleep.

That house always scared me after that. I dreaded being inside it alone, always feeling like someone was watching me, but never seeing any more ghosts. My brother saw someone sitting in the chair in the living room one night, but he wrote it off as our stepdad. But the next morning, our stepdad was like, "No, I went to bed. I wasn't in the living room."

At any rate, there's my brush with the paranormal. Have you had experiences with ghosts?
Posted by Donya Lynne at 12:01 AM