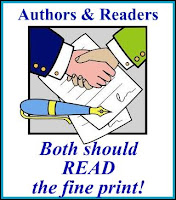 Have you ever read a book that you wanted to throw against the wall? It made you so angry that you just wanted to go Nolan Ryan and pretend the book was a baseball and you only needed one more strike to win the game? When this happens, it means the author broke their contract with you.

Contract? Yes, there is an unspoken contract between author and reader. Whether an author likes it or not, when she writes a book and a reader buys it, she has entered into a contract with that reader. Many call it "trust" instead of a contract, but call it whatever you want, there are expectations (terms) on both sides.

This is why when I hear a writer say she writes for herself, I get a little frustrated, because if an author is selling her books, she is NOT writing for herself. She is writing as a means to generate income, and as with any income-generating venture, she has an obligation to her customers, who have certain expectations. So, she is NOT writing for herself. She is writing for others. She may personally enjoy writing, but she can't say she is only writing for herself (which would be called journaling) when she expects people to buy her work. Okay...horse beaten dead, but if I hear one more publishing author say, "I write for myself," I think I'll throw something, especially if they follow up that statement with complaints about their books not selling or that they're not getting enough good reviews.

So, what constitutes the author/reader contract? If you do a Google search, you'll find all sorts of information about this vital agreement authors would be wise not to ignore. Below, I've expanded on the basics I found here and added a couple of my own.

That speaks for itself. I already discussed this topic in a couple of previous posts, but serious readers will not take authors seriously if their books are riddled with mistakes in grammar, spelling, punctuation, content, and story structure. If an author is content to continue selling only to a relatively small group of friends or niche readership who don't care about the mistakes, that's fine, but if an author wants to attract a wider readership, agent, editor, or publisher, knowing how to write well is crucial. An author who can't write won't be taken seriously by serious readers, wider audiences, and industry "scouts" looking for new talent.

3. The author will respect the intelligence of the reader.

This means the author won't dumb down the story to the most minute detail. While it's important to give your readers enough so they can build a picture in their mind, you don't have to tell them every last detail. For example, we know that people reach with their hands, so to say, "Angelo reached with his hand to caress Jana's face," is redundant. Just say, "Angelo caressed Jana's face." The reader knows he caressed her with his hand. There's no need to tell them so. And this also means you don't have to tag every piece of dialogue. Readers can follow along pretty well if you give them a couple of key dialogue tags.

4. The reader will be entertained.

This goes without saying. A reader's expectation when they buy your book is that they will be entertained. If you fail to entertain them, you've broken the contract. How do you fail to entertain? One way is by presenting them with a story that is full of errors that impede their ability to become fully immersed. I mean, when you're reading a book and trying to immerse yourself in the story, if you can't get past all the missing punctuation to understand exactly what's being said, how can you immerse yourself? Nothing is more disruptive to story immersion than a sentence that has to be read over and over before the reader understands what's being said. Imagine you're watching a movie that keeps stopping and starting, or where the sound cuts out and comes back on at random intervals. Is the movie entertaining or aggravating? That's what bad grammar and punctuation do to your writing.

Breaking any of the other clauses in the contract can also prevent readers from being entertained.

I've read stories where the author threw in what I called bait. This bait misdirected me and made me think something else was going to happen and took my focus away from the primary plot. Then nothing ever came of the bait, leaving me thinking, "Okay, what was that about?" I recently read a story where a character had to make a trip but kept receiving signs that this trip was dangerous and that he would only find evil and despair. Such a big deal was made about this that I sat on the edge of my seat, eager to see what all the fuss was about. What was the character going to find once he got to his destination? The setup made it sound like he would be in grave danger. But the character made it to his destination, nothing happened, and nothing "evil" or dangerous cropped up. And the story ended. I felt cheated. I was like, "Okay, so why was he warned so vehemently about going? Why did he see all these signs that the trip would put him in peril?" Don't do this to your readers. Make sure everything has a purpose.

6. The writing will be clear and understood.

Again, this goes back to punctuation, spelling, and grammar. "I lost mom," and "I lost, mom," have two very different meanings. All it takes is one missing comma and we go from the character losing a chess match to the character losing their senile mother in a mall. I could probably write a whole blog post on this subject, but that's for another day.

7. What the author puts in the story will have a reason, and MATTER by the end.

As I said in bullet #5, make sure everything has a purpose. Don't make your reader think about ABC if you aren't going to do anything with ABC. According to Goal, Motivation, & Conflict by Debra Dixon, you have more leeway on this point in a series than in a stand-alone novel. If you give your readers ABC and only give a partial view of what happens with ABC in book 1, as long as your readers know that ABC will be addressed in book 2, they'll be more forgiving. Otherwise, tie everything up by the end of the book.

8. The author will provide a story and characters to care about.

I recently edited a short story where the protagonist was an awful, selfish, hateful, pretentious cuss. I hated him. I wanted to see bad things happen to him, and he aggravated me so much that if I hadn't been editing, I wouldn't have gone much beyond the first page before moving on to another story. In short, the character was a dick! I didn't care about him or his story. This is not the kind of character you want to be creating. Readers don't like dicks, and they won't read a dick's story, because they won't care enough about him to be concerned with what happens to him. Same with weaklings or characters who are "perfect." Readers like damaged, but otherwise strong characters with good hearts. They like seeing a character in pain for no other reason than he fell in love with the wrong person, and they want to see him fight back and overcome. I think this is why my characters, Micah Black and Traceon, are so popular. They are severely damaged individuals, but at no fault of their own, and they have good hearts. Readers care about what happens to them, and they've let me know how much they care through emails, Facebook messages, etc. If you want readers to continue buying your books, make your characters likable.

9. The ending will fulfill the promises made during the course of the story.

Several months ago, an indie author was complaining on Facebook that she was getting several negative reviews and comments about the ending of her book not living up to reader expectation. They had liked the story, but when they got to the end, they got upset and angry. I didn't read the book, but apparently, the ending turned out to be this big twist that went against the grain of the rest of the book and didn't give readers the happy ending they wanted. She knew the ending was unorthodox, and she readily admitted that she knew ahead of time that it wouldn't be what readers expected. But she didn't care because it was how she wanted the story to end. BINGO! Did you catch that? It was how SHE wanted the story to end.

No, no, no, no, no. As an author, it is not about her. It's about the reader. It's always about the reader. It's like I said earlier, an author is not writing for herself when she intends to sell her books. Unless you want to break that trust with the reader and risk losing fans, you will give your readers what they want. It's damn hard to get back their trust and encourage them to buy another of your books once you've lost them.

At any rate, this author knew her ending was unorthodox, and yet she was upset that readers got pissed and felt cheated. I felt like asking, "What did you expect? You knowingly cheated them. Of course they're going to be pissed." These readers sat through an entire story, perhaps 100-300 pages, and they got all the way to the end where they should have gotten their reward...and instead they got cheated.

How would you feel if, after working for a week on a presentation at work, you were told an hour before the presentation was supposed to start that it was being canceled? You'd feel like your time had been wasted and you'd done all that work for nothing. Same thing with an ending that doesn't delivery.

Readers want happy endings. Period. Be warned that if you don't give them one, you are risking losing their trust. Readers want to know they can pick up one of your books and will get a great story, free of errors. One that will entertain them and not lead them astray or waste their precious time. They want to know an author knows the material and what they're writing about. This is the unspoken promise an author commits to when she writes a book: I will give my readers what they want and expect of me.

Happy writing and reading.
-D
Posted by Donya Lynne at 6:26 AM