On Halloween, It's "Nutcrack," Not Nutcracker 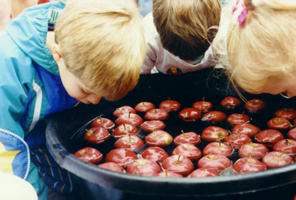 Have you ever wondered where some holiday traditions came from? Why is bobbing for apples and dressing up in costumes associated with Halloween and no other holiday? What about the colors orange and black being the accepted colors of Halloween? Halloween celebrations date back to 4000 B.C., which gives us over 6,000 years of traditions which have led up to how we celebrate Halloween today. Here are just a few facts about where some of our current traditions came from:


The colors black and orange are typically associated with Halloween. Orange symbolizes strength and endurance and, along with brown and gold, stands for the harvest and autumn. Black symbolizes death and darkness and reminds us that Halloween was once a festival that marked the boundaries between life and death.

Halloween was influenced by the ancient Roman festival Pomona, which celebrated the harvest goddess of the same name. Many Halloween customs and games that feature apples (such as bobbing for apples) and nuts date from this time. In fact, in the past, Halloween has been called San-Apple Night and Nutcrack Night.

During the pre-Halloween celebration of Samhain, bonfires were lit to ensure the sun would return after the long, hard winter. Druid priests often threw the bones of cattle into the flames, thus "bone fire" became "bonfire."

Dressing up as ghouls and other spirits on Halloween originated from the Celtic tradition of townspeople disguising themselves as demons and spirits so that they would escape the notice of the real spirits wandering the streets during Samhain.

Halloween celebrations in Hong Kong are known as Yue Lan (Festival of Hungry Ghosts). Fires are lit, and food and gifts are offered to placate potentially angry ghosts who might be looking for revenge.