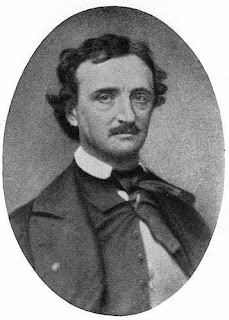 Pay attention this week. There might be a quiz and a prize next Friday. Just sayin'.

Fiction and the literary world have some great storytellers when it comes to horror and the bizarre: Dean Koontz and Stephen King come to mind. But the granddaddy of them all would have to be Edgar Allan Poe. With just the mention of his name, we know what he stood for in his writing. He's like the Dracula of authors.

Two days ago, I recounted my own true ghost story of the haunted house I grew up in, but did you know that the Poe house is also haunted? With a little help from the website, http://theshadowlands.net/famous/ , I found some fitting tidbits about the home where Poe lived. And, really, it would have been pretty anticlimactic had the home where he wrote in the attic hadn't turned out to be haunted, wouldn't it? 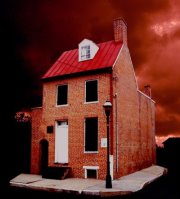 People often take it for granted that Edgar Allan Poe's former houses could be haunted. Though his ghost has been spotted other places, his old home on 203 N. Amity Street in Baltimore is haunted by someone else. The building is a two and a half story brick row house. It is very small and narrow. The attic room that Poe lived in is so tiny that adults often have trouble standing up in it. The house was built in 1830, and Poe's aunt, Maria Clemm, rented it in 1832. Poe himself lived there from that year until 1835, along with her, his grandmother, and two cousins (one of these cousins was Virginia Clemm, whom he later married).

In 1939 the house was almost demolished during a "slum clearance" program. It was taken over by the Edgar Allan Poe society of Baltimore in 1941. The house is open to the public and operated by Jeff Jerome, who has been the curator since 1977. One of the interesting things that can be seen there is a portrait of Poe's wife painted from her corpse. Doors and windows in the Poe house often open and close by themselves. In 1968 a local resident called the police after seeing a light moving around the closed building late at night. When the police arrived they saw a candle-like light move from the first floor, through the second, and up to the attic. When they went into the house, no one was there.

Curator Jeff Jerome has stated to several sources that the identity of the spirits has not been determined. Most of the activity has taken place in the bedroom that was once Poe's grandmother's (Jerome has also cautioned that many people have lived there besides Poe. After all, it was a rental house in a slum area). Elizabeth Poe did die in the house in 1835. In her room many people have been tapped on the shoulder. In 1980, people gathered for a radio station publicity stunt heard voices and other noises.  Several psychics have reported seeing visions of an old woman dressed in clothing of the 1830s. She has grey hair and is heavy set. Psychics have also reported sensations in Virginia's room and Poe's attic.

During the 1940s, the building became surrounded by Poe homes, the city's first housing project. Since then, the neighborhood residents have had their own stories about the Poe museum. Tales about his spirit are used to frighten children. A November 1985 New York Times article reported that street gangs were afraid of the house and therefore left it alone. Several residents have admitted to being scared of the place. A recent article that appeared in the Baltimore Sun (September 18, 1999) reported on how the local residents felt about the Poe house. Some people believe that Poe's ghost terrorizes the neighborhood, running across rooftops and grabbing children to torture. A local man reported that in August 1999 he looked up at the window to see a shadowy spirit sitting at a writing desk (others have reported this, though Poe actually did his writing in the attic).

The Poe house is open to the public, though the hours vary wildly from season to season. For more detailed information about the house, pictures of it, and visiting hours the Edgar Allen Poe Society 's web site is an excellent resource. 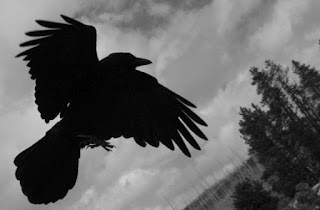 Come back tomorrow for another lesson to prepare for Friday's quiz.
Posted by Donya Lynne at 5:10 AM