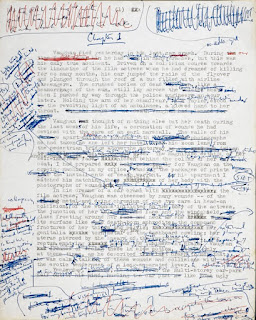 Yesterday, I talked about “authors.” Today, I focus on “editors.” And right now, I'm a little upset about a particular incident involving two "editors," so bear with me.

I recently helped out a friend with an edit. I know, I know...I've said before that I no longer do edits because most indie writers don't have a thick enough skin for my kind of edit, because yes, I'm tough. Thorough, knowledgeable, professional, but tough. I have found that my slicing open the bellies of some authors' manuscripts to check that all the organs are where they're supposed to be is just too much for them to bear, so I saved everyone a lot of pain (including myself) and pulled out of the editing business. However, I will make the occasional exception, and in this case, I did.

See, my friend paid two editors on previous stories to edit his work. He is admittedly dyslexic and has challenges with homonyms, and he wanted to make sure the stories were as clean as they could be and was willing to pay people he thought knew what they were doing to make sure they were publish-ready.

Long story short, he got ripped off, and I have to wonder, was he conned? Or did these editors really think they knew what they were doing? Because, apparently, a couple of reviewers were not so nice about telling him he needed to pay an editor to edit his work.

Umm, he did pay an editor. Or, should I say an "editor." An editor knows what they're doing. An "editor" is someone who likes to call themselves an editor but who really has no credentials, education, and certainly no business conducting an edit. In other words, they charge authors to mess up their work. And in some cases, they charge A LOT.

Now, now, Donya. You're being a little harsh, aren't you? And you're getting upset over nothing, you might be saying.

Well, one thing's right. I'm upset. And rightfully so. Why? Because it is an editor's primary responsibility to make sure an author's story is published with as few errors as possible and is reader-worthy. In other words, an editor's job is to make sure an author never receives a review that says, "Pay for a real editor." For an "editor" to charge for her services and not deliver those services is a breach of contract. It is a legal offense, and I think it's just a matter of time before one of these "editors" is sued in small claims court for not providing the services she was paid to provide. So, yeah, I think some harsh words fit here, because I can be harsh now and possibly save an "editor" a lawsuit, or said "editor" might end up in court someday and have to pay back more than just her editing fee. Which choice do you think is more harsh?

It is also the job of an editor to make sure the readers are taken care of. The readers deserve a story free of errors, as well as a story that flows well and makes sense. By taking care of the reader, an editor automatically takes care of the author. Unfortunately, I think too many "editors" are scared to piss "authors" off with negative feedback. Those "editors" aren't doing those "authors" any favors when they do that, and if "authors" (yes, the same rule between editors and "editors" applies between authors and "authors") get uppity and cop attitudes over negative feedback, oh well. Their problem. They need to grow a thicker skin, because NEWSFLASH! It's not all about them. It's ultimately about the reader.

But I digress…and we’ll talk about the relationship between authors and editors tomorrow.

I've had some pretty shitty things said to me, about me, and done to me because of my "harsh edits." But I'll tell you one thing: A story I edit will never get a review that says the author needs to hire a real editor (as long as the author heeds my advice and suggestions). Cuss my name, spit on my image, flip me off, and call me every name in the book, but I will never leave an author hanging out to the vultures or a reader scratching their head over what they just read. I take the role of editor very seriously, because I know what's at stake...for both the author and the reader. Unfortunately, too many indie "editors" don't. And that ticks me off.

As a writer and an editor myself, I've seen a lot of interesting things "editors" try to pass off as English grammar and punctuation: Using a semicolon instead of a period or em dash; overall improper semicolon usage; using ellipses instead of em dashes or periods; throwing commas into the middle of an independent clause (O.O Say what?); automatically using a comma to set off a prepositional phrase. I even had an "editor" tell me that, according to North American English (because grammar rules for North American English differ from other regions of the world who speak English), there are times when a period or comma go outside a quotation mark. No. According to my two grammar references, a period or comma never, without exception, goes outside a quotation mark. Never. Ever. Period. Not in the United States, anyway.

This "editor," who is allegedly an editor in chief of a U.S. e-publishing house, should know that. That is basic Editing 101 type stuff right there, and yet I was told I was wrong. No. I'm not wrong. I know I'm not. But this "editor" is charging authors to edit their work. If she doesn't even know one of the most basic of punctuation rules, or is too lazy to look it up, what else doesn't she know? Does she even own a grammar guide?

You know, I see this stuff or am privy to these conversations and muffed edits, but I normally sit back, sigh, shake my head, and move on. But it pains me to do so, because I want to help these well-meaning, yet unknowing writers who are putting their precious babies into the hands of clueless, uneducated hacks who have no business picking up the proverbial red pen and marking up these authors' manuscripts.

Strong words? Damn straight. Because I've taken severe heat for being as good as I am at editing when the people these authors should be mad at — and whose names they should be cussing up one side and down the other — are the "editors" who cheat them, rob them blind, perform lackluster and lousy edits, and blow smoke up an author's ass about how great his story is and that it needs no editing when, in fact, it needs major work in the editing department. Indeed, the actual story might be great, but the presentation needs to be fixed.

That's where an editor comes in...to help pull that great story out of the mire of content errors, misspelled words, poor punctuation, poor flow, and lackluster dialogue. An editor is the diamond polisher — the one who gets the story to sing on key, whereas it previously sang flat and sharp.

That’s not to say an editor’s job is to rewrite the story for the author. No. An editor’s job is to correct what they can, and then put the author back to work to correct the content, flow, and structure. Yes, the author should have to work—HARD—after getting their edit back (and for the record, a proofread is not an edit). Nine out of ten times, if an author isn’t working hard and feeling some pain after getting back an edit, the edit wasn’t good enough.

Let me repeat that: Nine out of ten times, if an author isn't working hard and feeling some pain after getting back an edit, the edit wasn't good enough.

In that respect, authors need to get out of their own way and let capable editors do their jobs. I’ll talk more about that in tomorrow’s post.

At any rate, what's the solution? How do authors find themselves a good editor? I've worked with a couple who are good (mine and the gal at Silver Publishing — she impressed me, which is hard to do). The rest of the "editors" I've been exposed to lacked. I mean, when I can go through their edits and disregard 95% of their corrections as mistakes, there's a problem.

I don’t really know the answer as to how to resolve this other than to tell “editors” to take some heavy duty editing, writing, and grammar classes, but if anyone knows of a good editor, or if you’ve got resources where authors can find quality editors, please provide the links and information in the comments. Perhaps we can start building a database of editors and I can add their links to my blog.

[NOTE: Even I struggle to call myself an editor, because my editing skills come primarily from writing courses I've taken and from self-teaching myself how to edit by reading and studying independently. True, my writing courses were extensive and discussed editing, but they were not editing courses, and I've studied straight from my grammar guides and from the books of Big Six editors who have written on the topic of how to edit, but I don't have formal training. I plan on rectifying that by signing up for actual copy editing programs and courses so I can earn the credentials, but I know "editors" who haven't even taken a writing class, let alone an entire course or even basic grammar, and they don't even own a reference manual...and it shows.]

Tomorrow I put the previous two posts together and talk about the relationship between authors and editors, because from what I’ve seen, this relationship has broken down to a destructive state.
Posted by Donya Lynne at 9:00 PM