Writing Can Be Lonely Work 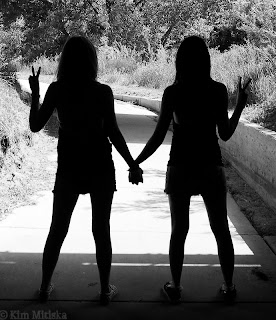 I'm one of those people who enjoys being alone most of the time. I love going to movies by myself, and enjoy eating alone. Maybe it's because I'm a writer and like studying what's going on around me so I can write about it later. A writer never rests. At least I don't. I seem to look at everything as potential input into one of my stories. So, while I'm frequently alone, I very rarely feel lonely.

However, there are times when I want to share with someone else. I would love to have that one best friend who lives next door to me, who gets me and who I get. That person who doesn't take offense when I inadvertently stick my foot in my mouth when I was only trying to be funny and says, "Don't worry. I knew what you meant and that you didn't mean anything by it. If anyone got upset by that, they need to loosen up." That person who laughs at my stupid jokes and loves that I'm the biggest, geekiest goofball on the face of the planet. That person who doesn't turn around and make fun of me for being the biggest, geekiest goofball on the face of the planet or put me down or say, "God, did you get a load that dress," when I'm out of earshot or when my back is turned. That person I can trust implicitly and who I know would never hurt me, because I would never hurt them. Someone who doesn't immediately assume the worst when I post something on Facebook and who knows me well enough to know that I'm not naturally antagonistic and gives me the benefit of the doubt, but who also knows I will be assertive and set my foot down when I've witnessed something unjust. Someone who knows that sometimes I'm all talk, but that that's when I just need to blow off steam and don't mean anything by it. Someone who won't hold my faults and mistakes against me for years to come, because they already know I do a good enough job of that without their help, because I am my own worst critic in every sense of the word (I'm still beating myself up over something I did as a sophomore in high school, which was 25 years ago).

I had that friend once, and I lost her when I moved away for a job transfer. I haven't found that same type of friend since. I have found that few understand me, and I hurtfully become the butt of more jokes more often than not. But maybe people do that because they think I'm strong enough to take it. They say that those who appear to be the strongest have the most sensitive hearts, so, maybe there's something to that. I don't know.

I really want that unconditional friend again who will have my back as vehemently as I have his/hers. That person who's so deep in my head, and whose head I'm so deep in, we just know what the other's thinking without having to speak.

Sorry. I know this isn't my usual post. But tonight was a night I suddenly felt lonely. I can't remember the last time I felt lonely, either, but tonight I did. I think in this world of virtual friendships that come and go, that's easy to do.

Here's hoping no one else feels lonely tonight. And if you have that one best friend who you can rely on through thick and thin, make sure to drop them a line tonight to tell them how much you appreciate them. I sure I wish I had my old bestie, Karla, so I could say that to her, but that ship sailed nearly two decades ago.