I love dialogue. Nothing quite grabs the reader or shows a scene more effectively than good dialogue, and since showing a story vs. telling it is the goal (or SHOULD be the goal) of every author, what better mechanism to use than dialogue?

Still, a lot of writers find dialogue tricky or otherwise scary to write and avoid it whenever possible. I recently tried reading a book (the operative word is tried), but found myself nodding off and zoning out of the story because it was 100% narration. There was no inner dialogue of the POV character, and there was no actual dialogue between characters. The story was written as if the author was simply telling it to me. Telling. Big hint that you're not showing. I can only imagine that the author was scared of dialogue, because they had ample opportunity to include it, but chose not to. At any rate, I stopped reading and haven't gone back to that book. I have a huge to-read pile and don't have time to waste on a story that isn't grabbing me.

So, how do you grab a reader with dialogue? Let's focus on actual dialogue that takes place between two characters first: 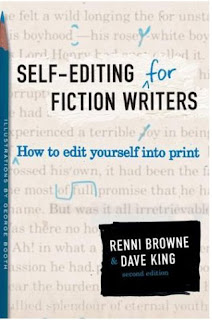 To dialogue tag or action tag? First, let's define these two terms. I like to keep it simple, and have taken the astute editing advice of Renni Browne and Dave King, two editors who have worked with the best of the best in authors, and who have learned from the best in editors. This is the best writing book I've ever read, and I've read a lot of them. These guys know what they're doing. With that said, a dialogue tag is -- are you ready for this? -- "said." That's it. He said, she said, I said, they said. Said is your only TRUE dialogue tag, and it is punctuated as follows: "I'm going to the store," he said. [comma, end quote, space, lower case "he"]

Oh, you can argue with me that you can use fancier dialogue tags such as "he yelled," "he repeated," "she cried," "I murmured," "I groaned," and so forth. After all, E.L. James took the art of fancy dialogue tagging to new heights in Fifty Shades of Grey. Everyone was groaning, murmuring, gasping, crying, barking, etc. But let me ask you, doesn't the exclamation point imply yelling? Doesn't the dialogue itself show you that a character is repeating something already said? Can someone really cry their words (assuming the crying is the tears variety style of crying). And, if someone is murmuring or groaning their words, how can you understand them? Because murmuring and groaning, by their very nature, don't allow for being heard and/or understood. Oh, and then there's the famous dialogue tag, "he gasped." Gasping is not speaking. You can't gasp a piece of dialogue, because the very definition of gasping implies the character isn't speaking, but issuing forth a startled breath instead.

Said. That's it. The word said is the only true dialogue tag. All other dialogue tag "posers" (as exampled above) can be either dropped or written better as action tags.

So, how do you write an action tag. I'll show the punctuation first: "I'm going to the store." He snatched his keys off the counter and stormed out. [period, end quote, space, CAPITAL "He"]

Oooooo, now we know something about our character, don't we? He's angry. Now we're on to something. We can see the action in our heads more vividly than with "he said." That is the essence of an action tag. Show us the action.

So, how do you turn a poser dialogue tag such as the ones I used as examples earlier into action tags? It takes just a wee bit of work, but hey, as an author, you still have to work. It's not supposed to be easy, so let's roll up the sleeves and take a look at each poser dialogue tag from earlier:


How does this stack up to your own writing? Have you learned anything new today? Will you be writing and tagging your dialogue differently from now on? Browne and King use the saying, Resist the Urge to Explain (R.U.E.) to convey how important it is to keep it simple. Oftentimes we writers make it too hard on ourselves and try to work tagging gymnastics into our dialogue, when all you really need to remember is "said" as a dialogue tag, and everything else as an action tag. It might take a little work, but eventually, you'll get the hang of it.

Oh, and before I go, "he asked" is not a dialogue tag, either. Why? Because the question mark conveys that the character is asking. Saying "he asked" is redundant and over-explaining (Remember R.U.E.). So, yes, the following is tagged correctly: "Where are you going?" he said.

Happy Writing.
Posted by Donya Lynne at 5:51 AM