Narration & POV - Making Sense of it All (If I Can)

I was recently talking to another author and friend who said she has been hit hard by her editor over the subjects of POV and narration. As we talked, I got the impression that she has been given bad information that has done nothing but confuse the holy living daylights out of her. So, being that I can't just let a writing subject like this die, I thought I would start looking into this topic and write a post to help clear up some confusion. Because, let me tell you, narration and POV seem to be two of the most confusing, misunderstood, and debated subjects in writing.

Let's start with the definition of narration according to askdefine.com (dictionary.com has similar definitions, but they weren't as interesting and clear as the one on askdefine.com): 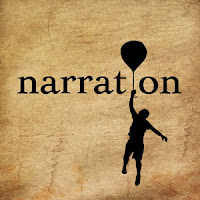 Noun
1. A message that tells the particulars of an act or occurrence or course of events; presented in writing or drama or cinema or as a radio or television program; "his narrative was interesting"; "Disney's stories entertain adults as well as children" [syn: narrative, story, tale]

2. the act of giving an account describing incidents or a course of events; "his narration was hesitant" [syn: recital, yarn]
Did you get that? A narration is simply a story. It's a tale. Also called a narrative.

In other words, narration is not bad. It's indispensable to writing a story. In fact, it is the story. Without narration, you have no tale. So, how come narration gets such a bad rap? Because people mistake narration for bad story-telling. I've even said narration is bad. That's how confusing this concept is. So, let's try to uncomplicate and devilify this poor little scapegoat called narration.

I tied narration and POV together for this post because they are closely related. It doesn't matter whether you are narrating your story, your character is, or some other-wordly entity is, narration is simply the act of telling the story through the eyes and with their own words of whoever's POV you're in. As long as you let your readers know who is speaking, it doesn't matter who narrates the story.

HOWEVER, it does matter HOW the story is narrated. Let me explain.

I've read narration (and I'm going to use that in place of story(ies) so we can get comfortable with the word "narration" as a friendly term and not a dirty word) that read like a sportscaster play-by-play: John touched Ann's face. Ann cringed. John said he was sorry. Ann forgave him. They held hands and walked out the door. John closed the door behind him. She smiled and waited. After the door was closed, John led her down the stairs." Do I need to go on? You get the idea. This is narration, but it's bad narration. And that's the problem: It's BAD. It's overly-detailed on the minutae that has absolutely no bearing on the story and only serves to slow the reader down. In other words, it's too descriptive with irrelevent details.

Any narration that is expressed poorly is bad narration. If it contains excessive grammatical errors, it's bad. Misspelled words? Bad. Poor structure and character development. Bad. It's still narration, but it's bad narration. (I'm beating this horse dead, I know, but someone has to exorcise the demons out of innocent little Narration).

Along those lines, if an author can't ice down their POV and properly convey who is talking, the narration is impacted negatively. I could write a whole post on POV, but as it relates to narration, if you head-hop (meaning you switch into John's thoughts while you're still in Ann's POV), you completely lose your readers, and they get confused over who's telling (narrating) the story. Being that Ann and John see things differently (or, rather, they should if they're well-developed characters), a reader who's thinking they're reading Ann's POV will become bewildered and lost when suddenly Ann notices the clogged up urinal. Huh? When did Ann start using the men's room?

Now you have to go back and read to find out where you lost the story, don't you? Actually, the story lost you. That's the effect of head-hopping. And it sucks ass and makes me wanna throw my Kindle across the room when I see it happening repeatedly in a "narration," because it royally screws with my head to the point that I can't keep up with who's speaking. Thus, the "narration" loses its effect and becomes poor quality. Say it with me now: Bad narration.

Some authors get agitated over catch phrases such as head-hopping, but - and here's another catch phrase - it is what it is. If authors don't want to accept the phraseology, that's their choice, but it won't change the fact that head hopping is head hopping. 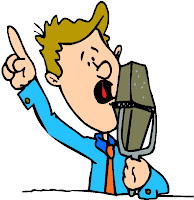 Okay, so back to narration.

A speech that bores me is told in a monotone, with a lot of uhs, ums, and ahs. It's dry with little to no vocal inflection. There are no pictures, the speaker seems disinterested, and there are too many facts, details, technical terms, or vague statements (admit it, you roll your eyes when a contestant or sports figure says, "I feel so blessed. This has been an awesome experience," and you practically drool when one voices discontent, gossip, or anything otherwise "juicy."). Company financial updates are major snooze-fests for this very reason. It's why we cringe when we hear we're having a company meeting.

On the other hand, speeches I've enjoyed have touched my emotions. They've made me laugh or cry. They include personal stories, anecdotes, and accounts of actual events. The speaker moves around, inflects his or her voice, gestures actively. They make faces to show you how they are feeling about what they're saying. They keep the language simple yet vivid and avoid ambiguity and terms that go over the audience's heads. The speech might also be accompanied by pictures or video, and the speaker is genuinely engaged.

I think it's obvious which of those types of speeches equates to bad narration and which pertains to good.

Interestingly enough, these two examples also illustrate another facet of good narration: Showing vs. telling. The first example is an example of someone who's just telling. They aren't showing you anything, and you see the result of the listener: Tuned out and not interested. A reader will do the same thing if all you do is tell them everything that's happening in your "narration" without showing them. Showing is what a good speaker (as in my second example) does. A good speaker (author) will show the reader the action instead of telling it to them.

But showing vs. telling is yet another confusing topic best saved for another day.

Suffice for now to say, narration is not bad. It's necessary. Narration is the story. It's HOW you tell the story that matters, not that you told it.

Until next time, happy reading and writing.

(If you have questions, please let me know. This is a very confusing subject. I will try to address POV and show vs. tell in my next couple of writing tip posts).
Posted by Donya Lynne at 10:44 AM