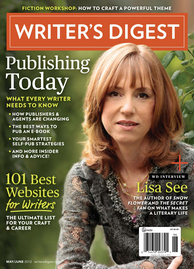 As a self-published author, I have to be doing it better, longer, and smarter than everyone else. I don't have a team of editors and proofreaders at a publishing house to make sure my manuscript is in tip-top shape. I don't have someone who handles the logistics of creating my cover for me. I don't have a high-paid, New York-based marketing team with their fingers tapped on to the pulse of every major book distributor in all the hottest markets.

No, I don't. I have to perform all those functions. Oh, and did I mention I also have to write the books? For we independent, self-pubbers, it can be daunting. I mean, hell, I'm the primary editor, the primary proofreader, the one who comes up with the vague idea for a cover so that my cover artist can work her magic and give me what I've described, and I'm my own marketing manager, even though I do have a team of folks who help promote me (God love 'em and thank them one and all!).

With that said, in the May/June issue of Writer's Digest, I found confirmation that I'm on the right track as far as what I need to do to eventually achieve success as a self-published author:

According to Writer's Digest, here are the first three steps to success:


Just a couple of points of interest from that list:

My writing tip from last week was about editing, and I said that editing is second to writing only because you can't edit without writing first. Editing is also the #2 point on this list from Writer's Digest (WD), second only to writing a good story. So, yep, you've gotta write first, edit second, and both are just about equal in importance. But for self-publishers, edit is even more important than for traditionally published books.

Regarding the last point on WD's list, I often feel self-conscious that I'm promoting too much. I see other authors criticizing authors who promote a lot, but really, promotion is pivotal to self-publishing. This point on WD's list just proves I need to get over my self-consciousness and get more creative about where I promote and how. What WD says is true: If you want to start a huge fire, you need to start several smaller ones. As a person who knows this first-hand from building fires at my dad's house as a little girl, I can say with conviction that if you only strike a couple of matches, that kindling won't light up. I want my kindling to light up.

If you are an author reading this, where do you promote? How do you promote? Do you have any favorite sites, blogs, or tips for other authors who want to become better promoters (like me)?