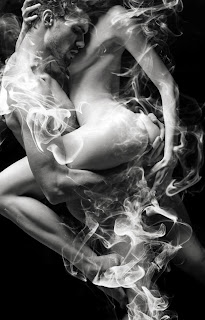 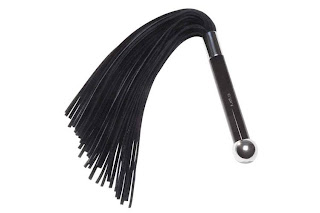 Micah had not only moved her into his apartment, he had taken her to his house, too, a mansion—well, to Sam it was a mansion after where she had lived for the past year—in a manicured community in the suburbs. And he had shown her the basement in his house, as well as the room that took up half the basement. Where he had a collection of equipment that Sam had only heard some of the harder-core girls at the Black Garter talk about in passing. So, that's what that stuff looked like. Admittedly, she had been turned on a few times by what she had heard, and had often wondered about using whips or ropes or nipple clamps. What did they feel like? Did people really get pleasure from that kind of thing? It surprised her that she wanted to find out.
"Which are you? A top or a bottom?" Micah chuckled and walked into the room with folded laundry.
Sam jumped, startled. "Will you stay out of my head?"
"Sorry, habit."
She laughed. That's what he always said. "You are never going to stop that, are you?"
He shook his head, wrapping his arms around her waist. "No." His grin was unapologetic. "I can't help it. I like the way you think. Especially when you're thinking about my special proclivities."
Sam's eyebrow arched. "Proclivities? My, what a big vocabulary you have."
"I'm just full of surprises." Micah pressed closer. "And I'm very well educated."
Sam's heart raced. "I can see that, and I'm sure you are." She still didn't know how old Micah was, but she could bet he had matriculated more than a few times. His intelligence was a huge turn-on, and over the past week, she had become more and more aware of just how immense his mental faculties were.
"Your intelligence turns me on, too." Micah bent his head and skimmed his lips over the side of her neck.
"Would you stop that?"
"Huh-uh. Nope. Never." He opened his mouth and closed it over her flesh, sucking gently.
Damn him, but he was persuasive.
"Well, can you at least stay out of my memories?" She shivered from the heat he lit inside her.
He released her neck and straightened. "I can do that. Maybe." He grinned and his lips pressed against hers, holding her there for a long moment as if he was stripping off her clothes with his mind then he slowly pulled away and growled as he pulled himself back under control. "I'm going down to the corner store for beer. I'll be back in fifteen. Need anything?"
It was Sunday, and the Super Bowl was on. Trace was coming over to watch the game. So, yeah, maybe they didn't have enough time to play just now.
"Maybe some pretzels?"
"Will do." He kissed her again then dragged himself away to grab his wallet off the dresser and shrug into his coat.
"Which are you?" she asked as he started to leave the room, referring to his earlier question. He had only shown her the room in his basement. Interestingly enough, they hadn't talked about it. She got the impression he wanted to ease her into the idea slowly.
He stopped and turned his blistering navy eyes back to her. "I'm a dom, but I also top. With you, I think I might actually bottom, though. But I'll never submit."
"What's the difference between a dom and a top?" She had so much to learn about the whole BDSM scene, but she wanted to learn. It excited her.
"A dominant requires submission, a top doesn't. As a top," he slowly stepped toward her as if he was hunting her, "I provide physical stimulation without requiring you to submit." He reached around and slapped her ass. Hard. "See, if you didn't like my slapping you as a top, you can stop me, or basically top me from the bottom. But if I was dom'ing you, I wouldn't allow you to do that. I would have control and your complete submission. Do you understand?"
Her ass stung in the most erotic way where he had spanked her. "I think so. Topping and bottoming allows for give and take between the two, but between a dominant and a submissive, one gives and one takes. There is no give and take."
He grinned mischievously. "Very good. You've just completed your first lesson."
The air smoldered between them. "I look forward to the next one."
"So do I." He backed away, grazing his fingertips over her cheek.
Posted by Donya Lynne at 4:58 AM