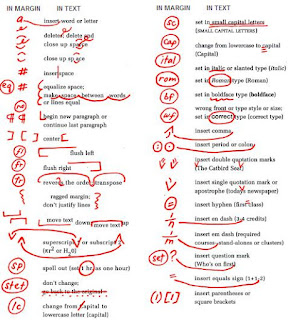 Recently, I've been doing some editing and proofreading for other authors' work, and I'm a bit worried—and maybe even terrified—about how they will react to my changes and suggestions.

Earlier this year, I stopped editing for other authors, because I found, unfortunately, that it was more trouble than it was worth. I don't go into an edit thinking that I'm going to destroy someone, even though I will admit—and have done so many times—that my edits are harsh. I know that it takes someone with a thick skin to receive one of my edits, because I go after every detail. I edit spelling, punctuation, structure, etc. But most of all, I edit content. I make sure that 1+1=2. For example, in one piece I edited (names withheld, because this isn't about knocking anyone. It's about teaching, and examples are the best way to teach), a man arrived home and entered the house, and then a couple of paragraphs later, he entered the house again. In another story, it's raining, but a few minutes later, the ground is covered with snow. Obviously, these are content errors, and I draw the author's attention to those. I try to be objective but assertive, and sometimes I will throw in my reaction as a reader so that the author can see how their story is affecting me, the reader, which I think is pretty important to know.

So, what's the problem? you might ask. The problem is, through experience, I have learned that this isn't what authors want to hear. I am literally terrified about turning this proofread back in because I found sooo much that still needed to be edited (the editing was supposed to have been completed at this point), and I'm afraid I'll receive the same reaction I've received in the past to the suggestions I've made, which is basically pretty violent and severe. For instance, last year my "best friend" posed as two other people on Facebook without telling me, and then proceeded to pull everyone I was close to aside and bash me in private chats, telling horrible lies about me and ripping me apart to everyone in a calculated attempt to destroy my writing reputation.

Why? Because I had given her a less than glowing, honest critique about a story she was writing. I hadn't been mean about it. I hadn't called her names or anything like that. I simply pointed out where I thought the story was weak and offered suggestions for how it could be strengthened. I actually thought we'd had a healthy discussion about the story, as a matter of fact. I guess I was wrong. Mind you, this was my best friend at the time, and she got so mental over that one, tiny, simple review, she practically destroyed me in every writing circle I was in, and her deception and plotting was so far-reaching, deep, and severe, I honestly don't think I'll ever fully recover from the damage she inflicted. I had to leave one writing group I was in and still feel like many of the people she talked to believe to this day the lies she told them about me.

It was only a freak accident that caused me to find out that the person doing this to me was my best friend, and when I called her on it after she'd been at it for nearly two months, she tried to deny it before finally going crazy on me. We haven't spoken since, but thank God my editor didn't fall for the games, because my ex-bestie went after her the hardest, trying to turn her on me.

So, yeah, after an experience like that, which was the absolute worst thing anyone has ever done to me, I get a bit gun-shy when it comes to offering critique, doing edits, providing feedback, and the like. Because, not only did ex-bestie go postal on me, but I've had other authors ask, "What do you think of this?" and when I give an honest answer, no matter how hard I've tried to soften up the negatives and glorify the positives, 9 out of 10 times, they blow up. I've seen some interesting things get posted on Facebook after I've given these folks the feedback they asked for, and it's clear they're reacting pretty badly to what I've said. If you don't want an honest answer, don't ask for it. That's all I can say about that. Because I can't lie. I just can't.

Consequently, I don't offer my opinion anymore, and I don't do edits or proofreads unless someone is very clear up front about what to expect and assures me they're cool with that. But this is one proofing situation I wasn't able to get out of due to the circumstances, and my heart is very heavy right now. I really don't want to piss anyone off. That's not my intent. I just want their stories to be the best they can be. When I edit/proofread, I do so from both a reader's POV, as well as from a writer's POV. I am advocating the reader while I edit and proofread, and I know that I know my stuff when it comes to the writing part (I'm not going to list all my credentials, but I have them), but I'm tired of being accused of hurting people's feelings and of purposely trying to make them look bad when I'm not.

I know that an author's story is their baby. I know this because I'm a writer, too. And maybe I just take a different perspective on the whole proofing and critiquing thing, because I love when my beta readers tear up  my work. As outside readers, they see what I can't. They are the ones to show me how readers will react, and if they react badly to parts of my books, readers as a whole will, too. I just had a fabulous ongoing, week-long dialogue with one of my betas over a component of my latest story that she hated, and she let me know she hated it. She pulled no punches, and I love her for that. Thank God she did, too, because SHE WAS RIGHT! My betas are right 99% of the time when they react negatively to something in my stories, but if I closed myself off every time they gave me negative feedback, I would never learn how to make my stories better. And if she had held back her reaction for fear of how I would react to her, I wouldn't be overhauling a character right now in my latest story...and the character NEEDED the overhaul (which is coming along fabulously, I might add, so yes, good call, awesome beta reader. Well played indeed). But it was only through my open conversations with my beta that I was able to finally see how this character needed to change to be more likable.

I guess I just assume all authors are like that. Maybe I'm wrong for thinking that way, but I believe every author worth their salt wants to get better at their craft and should be open to honest critique and feedback, no matter how it's presented (but I do try to be objective and professional, never issuing personal slurs or insults).

Whether authors are open or not, I can't go half-assed on an edit or proofread. It's not in my nature to cheat the system. That's not fair to the author I'm editing, but more importantly, it's not fair to the readers who will ultimately read their stories. And when it comes right down to it, I edit first for the reader and second for the author. And that's pretty much how I write, too: My characters come first, because it's their story. My readers are a close second, because the story is for their entertainment, not mine. And my needs and opinions come dead last. I don't write to entertain myself. I write for the reader and to tell my characters' stories. I am sooo not a part of the equation except to be the vessel that connects reader to character and vice versa. If I can't do that, I've failed, and I want anyone who's not feeling connected to speak up and tell me why, damn it, because I don't want to fail.

Okay, at this point I'm rambling. Ugh. The point is, I'm terrified to turn in this proof/edit.

Thanks for listening.
Posted by Donya Lynne at 1:21 PM