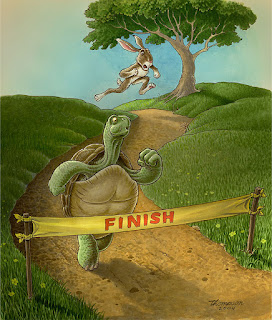 Every time I begin to panic that I'm not doing enough, writing more, selling more, gaining more fans, or publishing more books, I stop and remind myself that slow and steady wins the race. Just like the tortoise in Aesop's Fable, The Tortoise and the Hare, just because someone is fast and takes off like a shot from a gun doesn't mean they win. Sometimes, to truly appreciate and reap meaning from life or business (and be a true winner), the journey must be slow. You must work through the hardships and down times to build strong relationships that will last forever and to figure out how to pull yourself through those hardships.

If you're an author, or any kind of business owner with a Facebook fan page, you've likely seen a new craze on Facebook in the past couple of months: Liking and Tagging Events. More and more, I feel like these events are like the hare...a fast way to get out of the gates, but not really a good means to gain long-term success or hold steam over the long run.

If you're not familiar with Liking Events, let me try to explain:

At first, these events were set up as Like Ladders (ladders still exist, but events seems to be more popular now). The idea was that you would participate in these "ladders" by posting a link to your fan page on an assigned post on another person's page. The ladder would run for 10 minutes, 20 minutes, or even longer. Upwards of a hundred or more people would post their links, and then you would go down and like everyone's pages and they would like yours. I participated in several of these, and even though I was always on a ladder that included between 20-100+ links, I would only ever get 10-20 new likes on my fan page.

The trouble with like ladders:
Then, suddenly, the Like Event was created: A calendar event where invites were sent out to hundreds, or even thousands of people. Again, the concept was the same: Attend the event, post a link to your page (or your book, your Amazon author page, or what-have-you). Then you would go through and like everyone else's page and they would like yours. This was more successful than the ladders, mainly because, for the most part, the likes I got were from other authors and a better way to build my network. And these likers didn't drop off my page as much after the event was over.

One downside is that the time a Liking Event takes is excessively cumbersome. I spent almost an entire day keeping up with posted links in an effort to participate and like everyone else who had entered the event. And now, there seems to have been an explosion of similar Like/Tag Events, to the point that I can't even keep up with the invites. I don't know about anybody else, but I just don't have that kind of time. My writing and editing time is limited already due to my day job. I can't afford to lose an entire Saturday or Sunday scrolling down a list of hundreds of links, many of which are repeatedly posted (which is another downfall), trying to keep up with liking everyone. And when these events are conducted on a weekday, there's no way for me to participate until after work, and I don't want to lose my entire evening by having to play catch-up. Plus, Facebook has begun to shut these events down as spamming events. So, again, to get involved and spend that time, only for Facebook to shut it down, isn't a wise investment of resources, in my opinion.

But then I got to thinking about this. Are these Liking Events really successful in achieving what these writers/businesses want? Or are they just a shortcut...a means to cut corners? I mean, I liked pages for perfume and makeup and all sorts of things I'll never buy or be interested in (I am allergic to fragrance, can only wear a couple of kinds of makeup due to allergies, etc.). So, are these people liking my page when they will never have an interest in my books? If so, those aren't the kinds of people I want liking my page. I would rather have 1000 fans who have read my books and like them and who actually WANT to follow me than 10,000 fans who could care less and will never read one thing I write.

I'm torn. On one side, I can see that I have the potential to reach new fans, and I have gained one or two acquaintances from the events, but I haven't seen a spike in sales, activity, or anything like that. That's not a huge pay-off for the time spent and considering I received hundreds of new likes from the events. Hundreds of new likes, and just one or two new acquaintances who I talk to once in a while doesn't equate to a wise investment of my extremely limited time, though. I'm glad to have the new friends, but the time invested just seemed inordinate.

I have made more new friends tweeting on writing chats, participating in a writer's forum, and through my blog posts than I have from the Like Events, and these friendships are deeper and more meaningful to me because they were formed because the other party actually knew who I was and the friendship developed naturally and from a place of common interests. I didn't just post a link and hit like. I actually formed a bond with these people through natural progression.

From a personal POV, that means so much more to me than just hitting "like." From a networking POV, the time invested in these other types of endeavors (not the liking events) has been more than worth it, because true friendships are forming between these people and me. Sure, it might take longer to build that chain of bonds with one person after another, and to see my fan page numbers slowly creep higher, but it feels better and means more to me than the instant gratification of seeing my fan page numbers go up by 500 in less than two hours. Why? Because it means I've actually EARNED those likes. I didn't just post a link and get them without having to work for them. I earned them through friendship and because these people made a decision based on free will to like me, tag my book link, or like my author page. There's a greater feeling of accomplishment when you've actually earned new fans, and I don't have that ugly feeling inside that I'm just using people to get my numbers up, or that I'm being used to get theirs up.

Maybe I'm way off base. Maybe there is a hidden benefit to these events that I'm just not getting. Or maybe I'm just anal or overly conscientious of morality. All I know is that I want to earn the accolades and fans who join me along my journey. I don't want to drag someone along who doesn't want to be here, and I don't want to spend valuable time on an endeavor that won't reap longterm results. That's just not good business. To me, knowing I earned my likes and tags means so much more than simply cutting cormers, because if I cut corners, I don't learn a damn thing.

My numbers may not be as high as someone else's, but the numbers I've got are more precious and special to me because of the journey I took to earn them.