The Rules of Writing - Part I 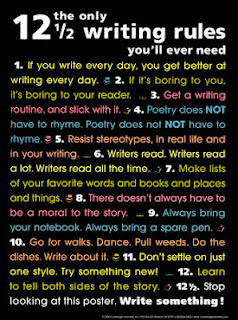 First of all, I love that picture. I smiled as I read each rule on it, because I've heard them all before and actually employ many of them in my own writing efforts. Maybe you do, too.

But does writing really have rules? Do we, as authors, have to follow a set of prescribed rules to perform our jobs as writers correctly? Of course not. That's the beauty of writing. However, there are some rules, such as those pertaining to spelling and grammar that if you don't follow will make it hard or nearly impossible for your readers to understand your book. Imagine if you were to read a book with no paragraphs, misplaced commas (or no commas), or even no punctuation at all. You'd probably put it down before reading a word. So, some rules are pretty darn important, right?

While searching the Internet for writing tips, I stumbled across an English site that included several authors' self-created lists for the "ten rules of writing." I prefer to call their lists advice or the ten guidelines of writing instead of rules. Whether you want to call them rules, advice, or guidelines, what they had to say was poignant and sometimes entertaining. Below are some of my favorite "rules," as presented by the likes of Elmore Leonard, Diana Athill, Margaret Atwood, Roddy Doyle, Helen Dunmore, Geoff Dyer, Anne Enright, Richard Ford, Jonathan Franzen, Esther Freud, Neil Gaiman, David Hare, PD James, and AL Kennedy.

These are just some of the pieces of advice given on the website. If you want to see the full list, the link is Ten Writing Rules by Authors . Take a look at what other authors have to say. I know I found a couple that have already helped to improve my writing, so perhaps you might, too.

With that, I'm off to employ my own rules of writing and get back to work on my next AKM novel, Return of the Assassin. Have a great Labor Day everybody. Can you believe it's almost autumn? Wow.

Oh, and before you go, tell me what your favorite "rule" of writing is? Do you have one?