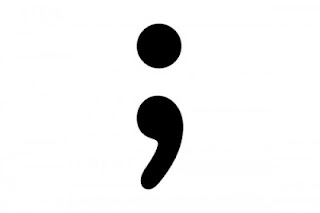 A dot above a comma. That's all a semicolon is. So why does it cause so many issues in the writing world?

There are two schools of thought about semicolon usage in fiction:

1) The semicolon is a valid punctuation mark that serves a purpose and should be used.
2) The semicolon has no place in fiction. At all. Period. No exceptions.

Both sides have a valid argument, but I tend to sway toward not using the semicolon, although I don't take such a hard line against its usage the way I used to. Here are my reasons why I prefer not to use the semicolon, though:

First, and probably most importantly, a lot of writers don't know how to use the semicolon properly.

The two grammar guides I use only list a couple of proper uses for the semicolon. The first is to be what could be called a super comma to separate a list of items that, themselves, contain commas.

In the above example, if we replaced the semicolons with commas, readers would be challenged to get through the sentence as easily as they do with the semicolons, because it would be difficult to tell which components went where.

Incorrect: I walked to the store; it was a beautiful day.
Reason: While both parts of speech are independent clauses (grammatically the same), the meanings of each are not similar enough to separate with a semicolon. The fact that it's a beautiful day is not the same as going to the store.

Correct: I walked to the store; it was right down the street.
Reason: Both clauses are independent, and both refer to the store.

HOWEVER, I would have written that sentence as: Since the store was right down the street, I decided to walk so I could enjoy the beautiful day.

See, I removed the semicolon and made the sentence more meaningful, encompassing the beautiful day as part of my reason for walking to the store, and clearly showing the relationship between the clauses with the word Since.

Which brings me to my second reason for leaning toward not using semicolons in fiction.

Semicolons are clunky. Period. They remind readers of dictionary entries and formal or technical writing, especially if they're overused. And when an author doesn't know how to use them correctly, readers don't know how to interpret their meaning correctly, and their reading experience is negatively affected. Moreover, if writers struggle to understand where to use a semicolon for the effect they're going for, it's safe to say that most readers of mainstream fiction probably don't understand the relationship being formed by the use of the semicolon, either. So, why use it if readers aren't going to get it, anyway? That's not an insult to readers, either. Let me explain:

The rule of thumb is to write fiction in a way, and with words, that every eighth grader knows (and I've even heard that rule as being for sixth graders). Now, I know I did not fully comprehend semicolon usage before high school. In fact, it wasn't until the past five years that I got a handle on the semicolon, and I can assure you, I was not in eighth grade five years ago. So, if the general rule is to write at or below an eighth grade reading comprehension, then why use elements that are, generally speaking, above that level?

Since I am all about the reader, I try to do everything I can as both a writer and an editor to enhance the reading experience, and that includes taking a hard look and a fairly hard line on semicolons. I rarely use them in my own writing. I think I've used one in all the manuscripts I've written, and that one is in my latest and will probably come out during edits as I find a better way to write the sentence.

I firmly believe that there are better ways to write sentences that contain semicolons so that the meaning is clearer, the sentence is more visual and interesting, and the semicolon can be removed. All it takes is a little work. Yep. Work. Sorry, but writing wasn't meant to be easy. It's a job like everything else, and while it may not feel like work for an author (I know it doesn't feel like work for me), a writer still needs to remember that their craft is work and apply some elbow grease once in a while rather than take the easy way out or say, "Eeehh, it's good enough. The book will still sell. I don't need to fix the punctuation." No, that's not "good enough." If it's not the best an author can make it, it's not good enough, and readers deserve better than that for investing their time and money in an author's work.

Finishing up here, some say to use a semicolon when you want a longer pause than a comma, but not the hard break that comes with a period. A moderate pause, they call it. Eh. Whatever that means. I've seen writers struggle with when to use a period over a comma and vice versa. Now we're adding the semicolon into the mix? Ah, hell. I'd better get my flack jacket, because this could get ugly trying to figure out a short pause, a moderate pause, and a hard pause.

I personally don't get that suggestion of a moderate pause. My grammar guides don't mention it, and I think that would just add to a reader's confusion about why the semicolon is being used, especially if you've got a reader who does understand the grammar rules of its usage. In my opinion, it's just not worth the risk to use it. There are more effective, less confusing ways to write a sentence without having to use the semicolon, and most Big Six and industry editors actually take a harder line than I do on the subject. While I will look the other way if a semicolon is used properly, they stomp their feet down and say absolutely not. Their stance is that the semicolon has no place in fiction. Period. No exceptions.

So, there's my take on the semicolon. Here's a site I found that included some fun ways to remember the rules of usage, although this site did promote using it for a moderate pause (whatever that is).

Rules about using the semicolon

Happy Reading and Writing!
-D
Posted by Donya Lynne at 7:39 AM