Rules of Writing - Part III - My Own Contribution to the List

Look at those pictures. Do those look like a nice, friendly altercations or angry ones? Pretty angry, right? Now, is this the kind of reaction you want to provoke in your fans and readers? Probably not.

My contribution to the list of rules I've posted over the past week would be: Unless you are Stephen King or any number of other highly successful authors who have earned the right to do pretty much whatever they want without repercussions to book sales, don't use your author persona to post your political agenda or publicly display where you stand on certain heated, societal issues. And definitely do NOT start a campaign against any one person or group of people who piss you off, don't agree with your political/social agenda, or write a bad review of one of your books. Doing so is akin to starting a protest, and from countless pictures we've seen of protests, not very many end happily or peacefully. Of course, if you're not serious about your writing, or if you have such a massive and loyal following you don't have to worry about losing fans, protest away.

Here's a true story: A few months ago, I became so disillusioned with one author's political and social agendas, as well as her posts against those who she felt "had it coming," that I had to unfriend her. Sad, but true. She is an exceptionally knowledgeable writer, and someone I had truly liked for quite some time, but I just couldn't take it anymore and found myself becoming angrier with every post she made, which is not something I want to feel when I'm trying to be productive. Her posts had progressively become more belligerent and argumentative in groups I was in with her to the point I had to leave the groups, and when she went on a crusade to out another writer/person who had a history of making stupid and inexcusable comments, I said "enough" and clicked unfriend. I wish her luck, but I can't be part of her success story anymore. But her actions did make me realize the importance of this rule, because I saw how her behavior made me and a few other people react to her by distancing ourselves from her. As a result, I never want to instigate such a reaction from my fans (and I will honestly admit that I could see I had the potential to do that), and I'm sharing this story with you so you don't make the same mistake, either. 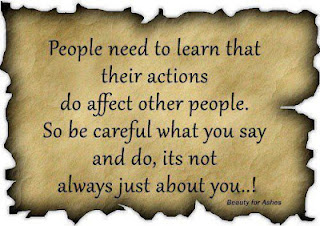 Here's the thing: I don't care where my fave authors sit on political issues, and I don't want to see them get into cock fights with another person who, quite frankly, doesn't deserve the attention, whether justified or not. That's not why I follow them or their fan pages. To engage in such politically and socially charged conversations and crusades is counterproductive and can damage your reputation, and you can turn friends into enemies with just one carelessly written post.

You don't see J.R. Ward, Nora Roberts, Sherrilyn Kenyon, and other best sellers posting about such heated subjects and making public outcries for the rights of certain segments of society (and even if they do, look at where they are. They've earned a place where they can afford to behave that way. We indie authors aren't quite there, yet). And you don't see those best selling authors arguing with their fans, making passive-aggressive posts against them and becoming the very thing they are speaking out against. That's not how you keep fans or win new ones. It's how you lose them and dissuade others from joining your ride.

The long and short of this rule is to be very careful what you say and post when in your author persona. I have learned this lesson from experience in the past few months, and it really is an important rule to abide by. One that I wish I had followed a few months back myself, because I've overstepped my boundaries once or twice, as well. Luckily, I'm learning from my mistakes. I hope you do, too, because you'll be much happier.