Maybe the question should be, "What am I not reading?" Despite trying to maintain a steady writing schedule while starting a new temporary job that will take me into September, at least, I am reading more than three books right now. Granted, I only read a a few pages of each, each day, but I'm still reading them.

I'll focus on the one I'm almost finished with, A Hunger Like No Other, by Kresley Cole. 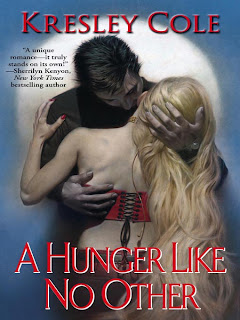 Maybe it's that this book was written in 2006 and writing formulas have changed, but I have really struggled with this book. I know Kresley Cole is considered one of romance/erotic fiction's premier authors, but this book is just not doing it for me. By the way, this is my first Kresley Cole novel.

At any rate, this book takes the formula of "make the characters find each other irresistible, but hate each other, too" to the point of book-throwing aggravation. Just when Lachlain and Emma look like they're going to find each other through the frustrating obstacles keeping them apart, Emma finds some reason to "fling herself away" from Lachlain. She's on the verge of orgasm and flings herself away from him. She finds herself drawn to him, but what does she do? She runs away. Ugh.

Emma frustrates the crap out of me. She is the type of female character I hope I never write in one of my books. I feel like she's two-dimensional, and I really don't have a sense for who she is or what she stands for. I'm 3/4 through the book, and I couldn't tell you much more than she is a fashionista, likes her ipod, and is drawn to jewels and gifts. Hmm. Sounds superficial to me.

So, maybe I'm missing the point, and hopefully by the end of the book, it becomes clear, but I have had noooo problem putting this book down while I'm reading it. Hopefully, later books in this series are better with stronger, more well-developed characters. I will continue giving this series a shot, though, because Ms. Cole has garnered a fine reputation in the industry, which might mean that more recent books don't follow the conventions followed in this one.