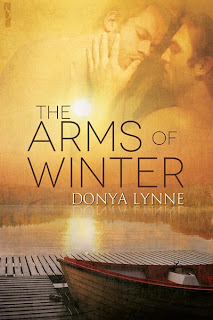 Just a tiny snippet from my upcoming novella, The Arms of Winter, to be released on June 30th through Silver Publishing. the Arms of Winter is a story about an ex-Army sniper named Sam Winter, who was medically discharged from the Army after being severely beaten by his sniper team after they found out he was gay. The beating was so severe that Sam suffered vision loss (blind spot) in his scope eye. Now Sam's future is uncertain. He returns home to face the scrutiny and denial of his parents, but it's his old friend, Cooper Brown, who Sam can't wait to see. Over the years, Sam has harbored a secret crush on Coop, and come hell or high water, Sam's finally going to tell Coop how he feels. Little does Sam know that Coop has secretly been attracted to him all along, too. What happens when Sam and Coop finally admit their feelings to one another could either go very well...or very badly. Possibly both. Can these two survive Sam's oppressive father?

Slapping the reins, he hitched Shooter on, leading the packhorse off toward the woods for the hour ride to the campsite, enjoying the freedom of being alone and away from the scrutiny and criticism of his parents. By the time he reached the site nestled between the trees and the banks of Walker Pond, the tension was gone and he felt happier than he had been in a long time, except for the time he'd spent with Coop in the stable, of course. That had been incredible.
He unloaded the horses, set up the tent, gathered wood, made a fire, and munched on a box of crackers while tending to his fishing pole, which was propped against a mound of rocks he and Coop had built a decade ago for this very purpose. It was hard to believe the site remained relatively unchanged after all these years.
The sun hovered near the horizon as the day waned, and he had just taken out his camera to snap some pictures when he heard the telltale cadence of horse's hooves. When he turned, he saw Coop riding toward him on a gorgeous chestnut.
"Hold on, let me get a shot of that." The light was perfect. He stood and clicked off a couple of pictures.
"Are you finished, Winter?" Coop smiled at him and tipped the front edge of his cowboy hat with his index finger as Sam aimed and snapped off another shot, then set the camera back in its bag.
"Yeah, okay. Sorry. You two just look good together." He gestured toward the horse as Coop dismounted and walked toward him.
Like laser-guided missiles, they came together like long-lost lovers, arms shooting around each other, lips locking together in a mesh of need. What was happening between them felt as right and natural as breathing, as if they had been dating since sophomore year and were just now getting around to the first kiss.
Home.
This was home. Right here, in Coop's arms. This was what he had flown thousands of miles to get back to.
"Not as good as we look together." Coop pulled away and grinned as his eyes ranged his face.
"You came." Sam couldn't stop smiling, and Coop's kiss had left him breathless.
Coop's chest rose and fell heavily, his hands caressing Sam's back. "Wouldn't miss it."
"I'm glad."
"Me, too. God, me, too."
Posted by Donya Lynne at 4:57 AM