Showing the Story, Not Just Telling It

Since I seem to be on a Star Wars theme, let's use another Star Wars example to illustrate showing vs. telling. And, really, what better example of showing vs. telling is there than R2D2. You don't know a thing he's saying, but you understand every word based on the sounds he makes, the inflection of the tones, and the way others around him react to him. We don't even see him as a droid. We see him as a living, breathing, little being with a mind and everything. That's how well George Lucas showed R2D2 into existence. 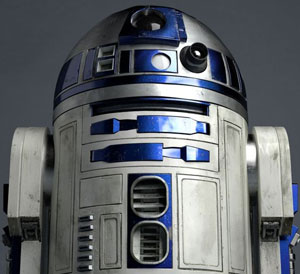 Watch the following scene, and pay attention particularly to R2D2. But also think about other imagery in the shot. For example, even without the introductory text, we know by about 15-20 seconds in there is a war going on, don't we?

Opening Scene from Star Wars Revenge of the Sith

If you were writing this scene, how would you show your readers all the action going on instead of telling it to them? For example: "Two small fighters swooped down over the Star Destroyer, flirting with the surface of the larger ship as they weaved and bobbed toward the nose of the warship then rolled and dove into the battle below." Also, how do you know what R2 is thinking and feeling? What sounds and inflections does he use to make you feel this way?

Here's another example of showing (not Star Wars related), and let me just say, THIS is showing:

If you don't have a tear in your eye after watching that, you'd better check your pulse. On the season premier of So You Think You Can Dance, this dancer came out and blew everyone away. He is the epitome of showing vs. telling. He danced from his tippy toes to the tips of his fingers. He showed you the wiping of his tears (he wasn't crying, but he demonstrated that he was). He showed you the pain. And he showed you taking out the knife and stabbing the pain. He told a story without any words at all, and he did so better than some writers, who have the length and breadth of every word and writing convention known to man to do so.

You want to know what showing vs. telling is? Well, you just watched it. The trick is in putting into words what you just saw. In fact, why don't you try. I challenge anyone reading this to write what you just watched, showing us with words what this remarkable dancer did. You can post in comments or email me at donya@donyalynne.com and I will review each submission and maybe even post a few samples of your work.

How many of you made it past 30 seconds? Yep. That's what "telling" is. And the reaction you just had is the same one readers have when they read a story which only tells them the action without showing it.

When you are describing,
A shape, or sound, or tint;
Don't state the matter plainly,
But put it in a hint;
And learn to look at all things,
With a sort of mental squint.
~Charles Lutwidge Dodgson (Lewis Carroll)

After getting into an argument, Ken and Tony had a fight.

Red-faced and with fists clenched, Ken looked as if he was only barely holding back from knocking Tony out. Status quo, just another day at the office. Those two came to verbal blows on an almost daily basis. Only this time, it looked like the daily argument might actually get physical.


The rest of us exchanged wide-eyed glances, unsure what to do, while the yelling between Tony and Ken escalated into shouted accusations over Ken stealing Tony's lunch out of the fridge.


The rest of us took a step back.


"Fuck you! I'll say it again, I didn't take your stupid lunch!" Ken pushed Tony back.


I tried to play peacemaker but Susan from Accounting pulled me back, shaking her head in warning when I glanced back at her. Message received: This wasn't the normal fight between good ol' Ken and volatile Tony. One or both would likely lose their job today.


Suddenly, Tony snarled out a string of profanities and shot his fist toward Ken's face.


In movies, the sound of someone punching someone else always sounds so dramatic, like a pop or crack. In reality, however, punching someone sounded much less ominous. Even though bone met bone when Tony's knuckles smashed against Ken's jaw, it was the sound of the breaking table as Ken stumbled back and fell on it that startled us the most.


Susan clapped her hand over her mouth, and everyone gasped. My buddy from Operations, Tom, who nobody messed with, tackled Tony before he could go in for another shot...


Okay, you get the idea. By no means is my "showing" example perfect, but you get a sense for the scene, participants, sounds, history, and action. In the telling example, we saw none of that. And you don't always have to write a ton of paragraphs to transform a sentence that tells into a piece that shows. For example, depending on the story and circumstances in the plot, I could have written, "After Tony blamed Ken for swiping his lunch, the two argued in front of the entire staff, coming to blows and breaking the table in the entryway." We're still shown more with that sentence than the original sentence.

Here is a link to some simple, excellent advice to help you differentiate between showing and telling and to give you more examples:

Showing vs Telling the Simple Way

Here's another resource worth looking at: When is Telling Okay?

Think of showing as telling a story without words. How do you do that in your writing? By showing us more than just the words. "There was a fire lit in the fireplace" is telling. "The chair cast a flickering, dancing shadow across the hardwood floor from the fire that warmed the room" shows. Both examples inform us a fire is lit in the fireplace, but the second example shows us more. You get a greater sense of the room than you do with the first example, and the second example doesn't come right out and tell you a fire is lit.

As with POV, I will hit the topic of Showing vs. Telling again soon, but how about trying your hand at showing vs. telling. Here are a few "telling" sentences. Can you rewrite them to show them to me?


There you go. Have fun, and until next time, happy reading and happy writing!