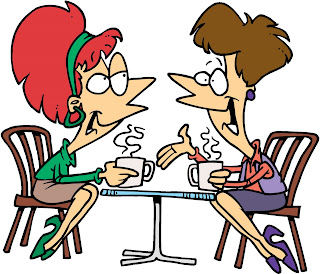 Just the word can make authors cringe in fear. Some authors I've read even refuse to use dialogue, and I can only surmise when I read a book with no dialogue that the author either doesn't know how to write dialogue or is absolutely terrified of it. And from what I've heard from a few authors and read in writing books over the years, it's the latter.

I don't know why a writer would be terrified of dialogue. For me, writing dialogue is my favorite part of writing. I just love, love, loooooove writing dialogue. Writing believable dialogue has been a goal of mine since I began writing my first stories in junior high. I remember working meticulously over every conversation I wrote between and among characters, asking myself, "Is this believable? Is this how people would really talk? Would readers be able to follow who's speaking?"

Little did I know it at the time, but I was teaching myself how to craft story for readers and put myself in the shoes of my characters to see from their points of view so I could "talk" the way they did and show it on paper.

Now that I'm older and writing books, I pay more attention to all aspects of writing as I read, including dialogue. And a couple of the things I've noticed is that a lot of times, authors narrate scenes when dialogue would show the scene more effectively, and that authors struggle to write believable dialogue. 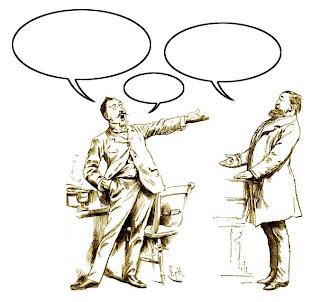 John told his manager he was going to take the day off so he could see his fiance, who was home from college. He hadn't been able to take off the last four times she'd come home, and he refused to miss her this time. Obviously, his manager didn't like this and threatened his job, to which John flipped him off and quit.

Scene Written as Dialogue
"I'm taking the day off tomorrow." John gathered his files and stood up, giving his manager a look that indicated he wasn't budging this time.

John had sacrificed the last four times his fiance had been home from college, and he refused to do it this time.

His manager scowled. "John, if you don't come in tomorrow, I'll be forced to take action."

"Are you threatening my job?"John's voice rose angrily. How dare this asshole threaten him.

"If that's how you want to see it, then yes. But we're too busy for you to take the day off."

John had had it. He hated this job, he hated his boss, and he hated not being able to see his fiance. "Well, you know what? I quit then." He flipped his manager off and left the room to clean out his desk.


See the difference? You can actually hear the characters' voices in the second example, whereas in the first, you're just told what's going on. This is a great example of how to show a scene rather than tell it. Dialogue is a wonderful means of showing vs. telling, which we authors constantly strive to do.

Okay, now for another example:

Dialogue That's Not Believable
Josie snatched her hand back as the flames licked up from the fire and burned her. She hadn't been paying attention, looking behind her at the sexy man she'd had her eye on all day, and her hand drifted toward the campfire her friends had made on the beach to roast marshmallows.

"Shit! Damn it! That hurts! What was I thinking? Stupid me." She instantly dropped the fork with the now-scorched marshmallow still in flames.

"Are you okay? You really need to be more careful. Hi, I'm Jonas. I'm a doctor."

Josie looked up to see her dream man crouching beside her. Her hand was already blistering and hurt like a bitch. "Yeah, I'm okay. But this really hurts. I can't believe I'm such a clutz. Silly me. Oh, and my name's Josie. You're a doctor?"

"Nice to meet you, Josie. Yes, I'm a doctor. Now, let's have a look at what you've done to yourself, darlin'. Boy, that looks like a nasty burn you've got there. You sure know how to hurt yourself."

"I know, right. Can you believe it? Yeah, it really hurts, too." 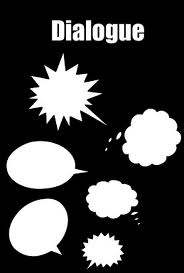 Okay, I'll stop there, because that's even painful for me, and I'm the one writing it. And before you go saying, "Oh, people don't really write like that. You're just making that up and embellishing," let me just confirm that, YES, I have read dialogue like that. Now, let's fix that scene with believable dialogue, okay?


Dialogue That's Believable
"Shit!" Josie snatched her hand back as flames licked up from the fire and burned her.

This was what she got for not paying attention to roasting her marshmallow, choosing instead to watch the sexy man she'd had her eye on all day as her hand drifted toward the campfire.

She instantly dropped her fork and the still-burning marshmallow to the sand, feeling stupid, and stared as a pair of blisters rose up on a patch of red skin. What if Mr. Sexy had seen her? She'd be mortified--

Josie looked up to see the man she'd been bashfully inspecting all day standing next to her. He knelt down beside her and gently plucked her hand from the air and scrutinized the burn. So much for hoping he hadn't seen her burn herself like an idiot.

"I burned myself." Well, duh, Einstein! She mentally rolled her eyes at herself as she winced at the pain. "It hurts." And that was no joke. The pain was excruciating, but she didn't want Mr. Wonderful to think she was  an even bigger flake than she already was by going crybaby on him.

The man looked up at her, concern in his eyes. "Come on. Let's get you up to the house and find an ice pack to put on this, and then I'll take you to my clinic."

Josie let him help her up, cradling her hand, which had started to tremble. "Your clinic?"

"Uh-huh." He waved over his shoulder at the guys he had been talking to. "Guys, I'll be back in a bit. She burned herself." He turned back toward her as they began to hurry up the beach to what must have been his house. Funny, she'd been here all day, admiring the home, wondering who lived here, and it had been his all along.

"What's your name?" he asked, opening the door for her.

"Um, Josie." She looked at him and tried to smile, but for all the pain she was feeling, she imagined her attempt at a smile came across looking like a grimace.

"Well, Josie, I'm Dr. Warren, but you can call me Jonas." He smiled warmly then led her to the kitchen, where he opened the freezer, pulled out an ice pack, and then wrapped it in a towel. "Here you go." He handed it to her.

"Thank you." She placed the pack against her hand and felt immediate relief. "Ah, that's much better."

Jonas nodded once toward the door. "All right, now just keep that on your hand, and I'll get you to my clinic and put some ointment on it and wrap it."

"Do I need my insurance card?"

Josie let him usher her out the door...

Do you see the difference? In the second example, I rearranged some things to make the introductions to one another more believable, for starters. I also removed Jonas's use of the word darlin' when referring to Josie. It's not professional for a doctor, and it's too informal at this stage when they don't know each other. I also used action tags to show more of the scene, removed all the hokey extra fluff that we simply would not say in real life, and created more of a conversation between the characters rather than a he-said-all-this and she-said-all-that kind of thing, which is not conversational at all.

Do we speak this way...?
"I have not yet seen that you took the course of action implied by our friend to sell your car. Will you be keeping it?"

Or this way?
"I haven't seen your car up for sale, yet, so I guess you're keeping it?"


Do we speak this way..."
"We are not going to the store. I am taking Cathy to dance class, and you are staying at home."

Or this way?
"We're not going to the store. I'm taking Cathy to dance, and you're staying here.

The lesson here is, we use simple language, not formal language, when we speak. We contract our speech. Don't work so hard to make your dialogue formal. Keep it simple and conversational. How many times do you hear someone say, "He is so flatulent."? We say, "He has bad gas." Or, when was the last time you heard someone say, "Jill is so obsequious when it comes to Joe."? No, we say, "Jill fawns all over Joe." And do we say I am or I'm? You are or you're? He did not or He didn't?

When writing dialogue: 1) Stay true to your character (for example, a doctor who falls into doctor mode at a beach party is still going to behave like a doctor. He won't call his patient darlin'); 2) Make sure the dialogue is relevant to the action (for example, would these characters really be thinking about introducing themselves so casually right off the bat when Josie's hand is burning and Jonas's primary concern is to treat her? Probably not.); 3) Ask yourself, "How would I say this if I were in his or her shoes? What would I say in this situation?" This takes a bit of imagination and the ability to crawl into your mind and envision a scene and how it plays out.