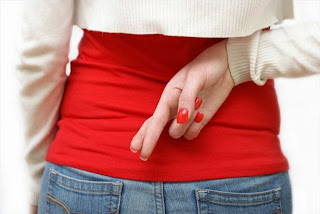 About three years ago, I met this gal who claimed to be an author. We were in a Facebook group together, and she sometimes posted in group chat that she had run off to talk to her publisher. I remember being so in awe. At that time, I had yet to publish my first book and was unemployed, working as a temp, and trying to figure out what to do about my dream to become published. So I grilled this girl with questions. She claimed to be published and said she was currently looking for the right deal before she published her next story. On a couple of occasions, she posted in our group chat that she had turned down another contract "from her publisher" because the "deal wasn't good enough." I was so excited to learn from her. I thought I was in the midst of royalty.

Imagine my disappointment when I later found out that this girl wasn't "published." She and a few others had written a story they posted on an online forum. That was the extent of her being published. And then I found out her "publisher" was really just a friend who was involved with e-publishing. At this point, I don't even think their was ever any discussion of a book contract, which is what she led us to believe.

So, basically, she embellished the truth so far that it became a lie. She made us all think she was only a step away from breaking into the big leagues. I still feel like an idiot that I believed her. I had viewed her as my mentor, and she lied to me.

There was this gal who called herself an editor. She wanted to beta read one of my short stories. I sent it to her. When she sent it back, she had "edited" it. Only one problem: 95% of her "edits" were errors. For starters, she removed every incidence of a comma that separated two independent clauses that were connected by a conjunction, and she added commas between every independent/dependent clause combination.

Every grammar nazi reading this just snapped her red pencil.

Of all her "corrections" to my manuscript—and there were a lot—I think only two were acceptable. The rest created grammatical or punctuation errors. Here's the kicker: this gal now promotes herself as an editor on Facebook and elsewhere, and any number of authors could be hiring her right now to edit their books.

What's my point? My point is that you never really know who you're meeting online and whether they are what they claim to be in their bio...or whether or not what they're saying is true...or even whether or not they're good for your publishing health (some folks are simply toxic and will bleed you, suck you dry, and drain the life and love of writing right out of you if you let them). Online, you enter into a silent, blind agreement to trust what the other is telling you is the truth until they prove otherwise, but sometimes that can be too late. And for authors or wannabe authors, it usually is.

For example, if you're an author searching for an editor, you don't want to learn after you've shelled out $500+ dollars that the person you just paid to edit your story is a crackpot who has no business wielding a red pen over your precious baby you spent months creating. I mean, when the author knows more about grammar, punctuation, content, and story structure than the "editor" does, that's a huge red flag. And you certainly want to know that the author you're seeking advice and/or mentorship from knows what she's talking about and not just blowing ego-boosting smoke.

So, how do you find the right people? The reputable people?

1. Patience. Yes, I'm sorry to say, it takes time to find the right circle of authors and editors to associate yourself with. I learned this the hard way, but am proud to say I'm now so happy and proud to be involved with the people I've become associated with in the last year. If you feel like you're being dragged down by someone or a group of someones, that's when it's time to move on. You're growth and potential are no longer being served.

2. Join reputable writing organizations such as Romance Writers of America or Mystery Writers of America and attend every meeting. I joined RWA in January of this year, and it's been one of the best decisions I've made for my writing career. You're around like-minded people in these groups, which operate like small businesses. You learn from them and have incredible opportunities to get involved in the writing community, and the more involved in the writing community you become, the better you'll be as a writer. And the people in these organizations will be able to refer you to reputable editors, publishers, and other authors you can learn from.

3. Pick up the Writer's Market books. The creators of Writer's Digest update these every year, and there are a few you can purchase. I like the Writer's Market Deluxe Edition and Guide to Literary Agents the best, but you can also buy editions for the novel and short story market, as well as a non-deluxe version. These books, while they can be dated with the speed the publishing industry changes nowadays, offer tons of advice and listings for professional organizations, contests, publishers, and agents. They can be a great way for you to research and find reputable industry professionals to connect, network, and consult with.

4. Attend conferences and conventions. What better place to meet the stars than at a book conference or convention? There are always workshops you can attend, and everywhere you go are opportunities to mingle with other authors, agents, editors, bloggers, publicists, publishers, etc. These are people serious about the craft and life of writing. These are the people you want to be associating with and getting to know. And everyone has a business card or material you can collect to reconnect with them later. I came home from RT in Kansas City this year with a whole bag of cards and informational material. These are excellent venues to tap into reputable industry professionals.

I would love to know what other ideas are out there for finding quality editors and constructive writing groups. Links in the comments are welcome.