Return of the Assassin Now Available! 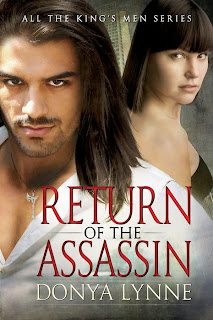 My latest book, Return of the Assassin, is now available, albeit three days earlier than anticipated. It was due to come out on Oct. 29, but for the first time ever, Barnes and Noble pulled the trigger finger faster than lightning to make the listing go live within five hours of my uploading it. So, ROTA went up everywhere as of last night.

The first eighteen hours of publication have been amazing, with the book ranking the highest of all my books within ten hours of initial upload to their site. Two five-star reviews have already been posted, and fan reaction has been incredible. Lots of tears (everyone I've asked so far said they cried while reading the book), and many have said already that this is the best book yet in the series. I'm blessed for that, because a lot of times, books in series become less interesting as the series ages. Five books in, and my readers say the books just keep getting stronger.

Reviews have been outstanding, including a fabulous GraveTells review that had this to say:

"If you've been waiting for the next Black Dagger Brotherhood, this is it, but with a story arc and featured characters that stand on their own merit and writing that is as complicated and talented as J.R. Ward's without the abrasive, almost gangster style. I dare you to read Return of the Assassin and remain completely unmoved by the events in this book. And to think, this series has so much potential awesome left to explore!"

I do get compared to J.R. Ward quite a bit, and I'll admit she's been influential in my writing. I love the multi-POV story lines, and I like brash banter, much like she does. So, I don't mind the comparisons. It's an honor to be compared to her.

Now it's time to turn my focus to the next book in the series, Bound Guardian Angel, which is Trace's much-anticipated story. With high expectations come increased odds that those expectations won't be met, so I have to work extra hard on this one to make it the epic story fans hunger for. But I think I can do it. With the draft already started, Trace's story promises to deliver a few interesting scenes of action I've never seen anywhere. I think readers will have to peel themselves off their ceilings after they read his story. We'll see.

But for now, let me introduce you to a few new characters you'll meet in Return of the Assassin:

Email ThisBlogThis!Share to TwitterShare to FacebookShare to Pinterest
Labels: AKM, All the King's Men, Donya Lynne, Return of the Assassin