Solving the "Had" Mystery - Is "Had" Really Bad?

Still others will tell you that "had" is passive. I've been told this so many times that I actually researched the word "had" and passive voice pretty extensively to determine the rights and wrongs of usage.

Let's begin by defining passive voice. According to Grammar Girl (and every other writing reference I've consulted), passive voice is created when the object of the action is promoted to the subject position. For example, "I heard it through the grapevine" is active (subject-verb-object sentence format). To make that sentence passive, you would write, "It was heard by me through the grapevine" (object-verb-subject sentence format). Another way you can determine passive voice is to add "by zombies" at the end of the sentence. If the sentence makes sense, you have passive voice. If not, you have active voice. For example, "She set the book on the table by zombies" doesn't make sense, so "She set the book on the table" is active. However, "The book was set on the table by zombies" makes sense, so "The book was set on the table" is passive.

Additionally, many people think that just because a form of the word "be" is used (am, is, are, was, were, be, being, been), the voice is automatically passive. That's not the case. "I am alive" is active and uses a form of the word "be." Another example is "I am holding a pen," which is also active. "A pen is being held by me," would be passive.

To read more on this, visit Grammar Girl's site and the related article, Active Voice vs. Active Voice.

Now that we've defined passive voice and know what it is, let's tackle "had."

In writing, there are three basic verb tenses: present, past, and future.

By the way, all three of those examples are active sentences, not passive. First, let me point out that these sentences are active, not passive, despite the use of the word "had." Second, each sentence indicates a slightly different reference to time than the other. If you want to study this further, check out the Types of Verbs page on Englishpage.com. Along the left on the page, you can select the different verb tenses and study them, get more examples, and complete lessons to help you learn how and when to use them.

The point to remember here is that "had" is part of the past perfect verb tense and not necessarily passive.

So, how does the past perfect tense affect your writing? Authors usually write in one of two verb tenses: present or past. When you write in present tense, writing flashbacks is as easy as writing in the simple past tense. However, when you write your stories in past tense the way I do, if you want to insert flashbacks or refer to something that came before, you must use the past perfect tense or risk confusing your reader.

Here's a short excerpt from my upcoming Return of the Assassin. The story is in Gina's point of view at this point:

She closed her eyes and tried to push away Malek's memory, which was becoming harder to do. Malek was the male she had met—and then left—in Chicago. The male who had saved her when all she had wanted to do was die. The male who promised to be a whole lot of holy-hell-I'm-in-trouble if she let him. 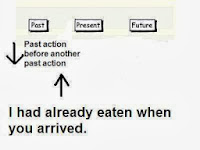 Since I write in past tense, I had to use past perfect in the italicized verbs to indicate action that came before in the story. If I had maintained the simple past tense, the reader wouldn't be able to distinguish whether I'm referring to the present moment within the story or a past moment from before. Go back and re-read the paragraph without "had" and you'll see what I mean. Sure, you might be able to figure out some of the timing by the context, but it's my job as an author to make the reader think as little as possible so they can simply enjoy the experience of the story. This is just one paragraph. Imagine having 30+ chapters of simple past tense where you have to think about the context to figure out the order and timing of events within the story, trying to figure out what is flashback or past events, and what is the present moment within the story? That would get exhausting, and no reader wants to work that hard. It's the author's job to remove the work for the reader. Using past perfect is the solution to helping the reader understand the story.

Now let's say you have a multi-paragraph or multi-page flashback. How do you write that without italicizing the whole segment, which is becoming an archaic practice, in favor of weaving the flashback seamlessly into the story? I suggest you use the 3 in-3 out rule, as explained in The Best Writing Advice blog post on InTheGardenOfEva.com. I've copied the pertinent text directly from her blog:


If you write your story in the past tense, you have to use the past-perfect for flashbacks. The past perfect is the tense used to talk about something that happened before something else that happened in the past. I call it “the had tense.” For example, the past perfect is bolded below:
He walked into the bar and saw her standing near the pool table. The last time he’d seen her, she had stabbed a fork into his leg.
But the past-perfect gets old awfully fast with all those “hads.” The solution is to start off your flashback with the first three verbs in past-perfect. This makes your reader aware of what’s going on. Then switch to simple past, which is much more pleasant to read. At the end of your flashback, make the last three verbs past-perfect to get your reader “out” of the flashback.


If you read a lot, you've probably noticed as I have that fewer authors are using the italicized flashback in favor of the seamless, 3 in-3 out flashback. I use one of these flashbacks in Return of the Assassin, and while it felt weird and took a little finesse to work the verbs so that readers fell into the flashback easily and emerged from it just as easily, I like this method. And since more editors now frown upon italicized flashbacks that can be too jarring on readers, this is the way to go from now on.

So, see. "Had" isn't so bad. The word "had" has a vital place in fiction writing. It isn't a bad guy or an automatically passive villain. Yes, there are instances where "had" can be rewritten out for a stronger sentence, but that's not always the case. So go easy on your quest to rid the world of "had." He has a place, and his place is necessary.