Why I Might Not Be Around for a Week or So 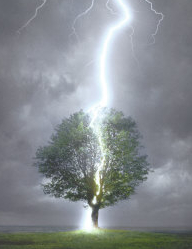 I hope your day is going better than mine, but it could be worse. This is what I posted on Facebook (copying it here saves me some time):

Had an interesting morning at my house, which resulted in the fact that you all might not see me on here much over the next several days or longer. Here's how my morning went:

Woke up at ten 'til 5:00. Hit snooze. Dozed back off. Woke back up at 5:30 and decided to get up and hit the final proof on Micah's Calling. Rolled over in bed and looked out the windows. A gust of wind blew up out of nowh...ere with such ferocity, I thought a tornado was about to hit. That's when I saw the non-stop flashes of lightning way off in the distance. What sounded like all manner of debris clattered down on the roof. The wind strengthened. I went from "Yay, a storm!" to "Oh shit, this is gonna be bad" within a fraction of a second. The power went out. No flickering. Just out. Gone. From the wind. I lit a candle and used my cell to call the power company to report the outage, and then I settled in to watch the storm as the lightning got worse. About ten minutes after the power went out, I was looking out my window, when this ungodly flash of light with what appeared to be a slender thread of pink filament exploded outside. And when I say exploded, that's exactly what I mean. BOOM! It sounded and felt like about ten tons of C4 had just been detonated in our front yard. "OH MY GOD!" I screamed. My hubs shouted out something much more colorful and proceeded to lie frozen in fear for about a minute. One dog took off. All but one cat disappeared (Spookie just flinched and fell back to sleep).

It was pretty exciting for about 45 minutes to an hour, and then the storm passed and the sun began to rise. The power was still off. My hubs went outside and after a minute, I heard him calling me to the window. He pointed to our giant tulip tree. Oh no. I went outside, and all up the tree, streaks of bark had been blown clean off. I found one piece about fifteen feet from the tree. Our tulip, which sits just off the corner of the house, had been struck by lightning. One lown sheet of bark was bowed out from the tree, but still attached. We surveyed the damage, went back in, and I edited my manuscript by candlelight, and then we both dozed back off.

The power came on right after 8:00. That's when we started to notice the damage inside the home. The modem was fried. As in literally fried. You can shake it and hear the parts rattling inside...and it's burned. The router is fried. One laptop is toast. The phones are toast. The DVR is zapped. Without our cell phones, our house is effectively closed off from the rest of the world now. I have ZERO ability to do anything on the internet from my home right now (I'm at my office at the moment), and I'm not sure when we'll be back up and running, being that we have to order a special router (hubs has our home network set up special, but he's the I.T. guy, so this is his baby).

What does this mean for the release of Micah's Calling, which is supposed to be next weekend? I don't know, yet. I can prep the manuscript, because my computer still works at home, just not the internet, but I can't upload it until we get access to internet again. So, I'll take this day-by-day and see how it goes. We're just happy our air conditioner and water heater seemed to have come through unscathed. We may not be able to watch TV, hit the internet, or take any calls from home, but at least we'll be comfortable. LOL. Looks like I'll be catching up on my reading now.