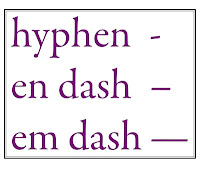 Lions and tigers and bears, oh my! More like hyphens and dashes and...more dashes. Oh Lord!

The dash, the en dash, and the em dash. The Three Musketeers of the writing world. The Holy Trinity of the literary apocalypse. The...okay, you get it. These simple lines on paper (or a computer screen) are enough to make the staunchest writer quiver if they don't know when to use which.

No, don't run away. It's okay. No need to panic. This is easy. Really. Check it out:
Thank you to www.kajhaffenden.com for the above definition and shortcuts.


Em Dash
In writing, the em dash is likely to be the dash you will use most. Why? Because we think and speak in parenthetical statements, which means that — for the most part, at least — your characters will, too. [Did you see that? I'm pretty excited. I've never used the alt+0151 trick to create an em dash. Woo-hoo!]. I'll admit that I'm the queen of the parenthetical or interjected thought in my writing. Just ask my editor. But that's how my characters speak and think. They not only cut each other off, but they interrupt their own thoughts by interjecting extras as they think and speak. The em dash is used to convey that interruption of flow.

Dash (Hyphen)
That leaves the hyphen, otherwise called the dash. The hyphen is used for — gasp — the hyphenation of words. Imagine that! A hyphen hyphenates. No shortcuts are needed to create the hyphen. The hyphen has its own key — right next to the zero — on your keyboard. It is what it is, nothing fancy. A hyphen is like milk without chocolate syrup. It's plain ol' vanilla ice cream (and sometimes vanilla is all we need, right?). You would use it in words such as like-minded, shell-shocked, and mother-in-law). And that's it.

Hopefully this has helped clear up this much-misunderstood — and maligned — trio of punctuation marks.