Authors hear a lot of "Show, don't tell," but do they really know what that means? I'll admit that while I do know what it means, I struggle to explain it to others. Well, not anymore. As part of my birthday/Christmas gift to myself, I ordered a batch of writing books, including one called Showing & Telling, by Laurie Alberts: 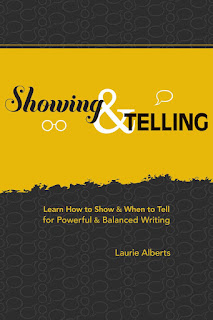 What I've struggled to put into words, Ms. Alberts makes simple, and this book is so inspiring that I've decided to write a series of blog posts based on the concepts outlined in the book, starting today with the introductory matter. I would highly suggest that if you're serious about your writing, you pick up a copy of Showing & Telling and follow along...or not. I mean, if you buy the book, you'll be golden and won't need my synopses. :)

First, good writing uses both showing and telling. The trick is in knowing when to use which and how to use them (which, as this blog series continues, should become clearer, especially if you buy the book). What an author should strive for in a story is balance between showing and telling, or scenes and summaries, which are the two basic components of writing. That doesn't mean you need equal amounts of both. No. In this case, balance means knowing when to chill on a scene and give us some summary to keep us connected between scenes and to give us a dose of your character's distinct voice.

Scene vs. Summary
This is just another way of saying Show vs. Tell. In fiction and some nonfiction writing, such as memoirs, you have two means of story-telling: scenes and summaries.

Scene: Scenes allow us to enter the action and feel the emotions of the characters. They take place in the moment, within the scene. Scenes are essential for breathing life into your work. This is where you show the action to the reader. Think of a movie, which is built completely out of scenes (unless you have a narrator who pops on once in a while, such as Bella in Twilight or Deckard in Bladerunner). If the actors just sat in chairs and told you about the scene, that would be pretty boring to watch, right? But they "act" out the scene, thus dramatizing it. That is how you need to think when writing a scene in a book. Think about "action" and how actors would show that action on the big screen.

Summary: Summaries are the material between the scenes and contain background exposition, character thoughts, reflection, or even—gasp—an actual summary of events that occurred over time or long ago. In summary, time is compressed. You're not experiencing it in the moment as you do in a scene. Summaries give context to scenes, meaning that scenes can stand on their own without the summary, but the summary enriches the scene by providing more information the scene doesn't offer. Lastly, summaries are often where distinctive character voices are created. By delving into past events and going inside the head of the character, we learn more about that character than what a scene can show on its own.

Scene: Pinned to the bed, Micah's hands holding her arms down, Samantha gazed up into dark navy pools of heat that stared at her hungrily. Her heart raced, pounding with such force that she could feel the pulse of her carotid at the side of her neck. Micah's gaze darted to the same spot, almost as if he'd read her mind, his eyes narrowing as his tongue barely darted out to wet his lips.

In that scene, we're in the moment. We are living each step as Samantha lives it. Seeing it as she sees it. Now, let's look at a couple of summaries that could shed light on what else might be going on. Remember, summaries add context to scenes and enrich them.

Summary #1: Who was he? All Samantha knew was that his name was Micah. When he had barreled out of that alley and grabbed her, his friend had called him by name. The other man had come after them, shouting in some strange language that sounded Russian but not quite. Romanian, maybe? Micah had turned and snarled—actually snarled at the guy. What the hell was up with that? And why was he now staring at her throat like it was his next meal?

Okay, so maybe my example isn't the best in the world, but the point is, in the summary, we're no longer in the moment. We're back in time. Maybe only a few minutes or a few hours back in time, but back in time we are. This summary enriches the scene by giving us more information, and we getting a clearer sense of Samantha's "voice," as well. [Note that at the end of the summary, I pulled you back into the moment of the scene by use of the word "now." We'll talk more about transitioning from summary to scene in future posts.]

Summary #2: Earlier, Micah had teased her relentlessly, playfully restraining her arms as she'd made dinner. He'd become more dominant like that lately, holding her hands behind her back as he assaulted her neck with his mouth, pressing her back against the wall as he kissed her. She should have seen this coming. Micah liked being in control in the bedroom, didn't he? And he certainly liked that she liked it, too.

This gives us a whole new idea about what's happening in our scene, doesn't it? Now, we no longer see that Samantha is in danger. Nope. We see that she and Micah have known each other for a while and that things have been building up to this moment...and she likes it. We still get a sense of her "voice," and we obviously are not in the moment in this summary.

And if we're not in the moment, we are not in a scene. We are in a summary.

Pretty easy, huh? I had never heard anyone put showing and telling in such an easy-to-understand context before. Show or tell. Scene or summary. Those are the basic components, and you need both to bring a story to life.

In Part II of the series, we'll begin looking at Showing: Making Vibrant Scenes. We'll also look at the purpose of scenes.

Until then, happy reading and writing!
-D

P.S. Yes, I am still working on a short series of posts regarding POV (omniscient, third person, etc.)