Pulling Weeds Out of My Life Has Disturbed My Soul's Soil...Temporarily 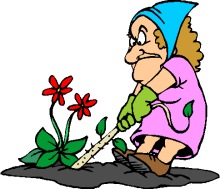 First of all, I want to apologize to my readers. My recent posts have taken on a negative air, and I'm sorry for that. Maybe this post will explain part of the reasons for what has been happening to put a cloud over me recently.

One way I've started preparing is that I've ended my writing partnership with someone who I felt I could no longer work with. She didn't react well, but it needed to happen. But the ending of this partnership had put a heavy burden on me for months as I struggled with making the decision. This burden put an enormous amount of stress on my mind, body, and heart, and I began lashing out in negative ways as I dealt with that stress.

I originally planned a long-winded expose on this subject, but I've changed my mind, simply because at this point, what's done is done. The partnership is over, but my decision was sound, with well-founded reasons, and I know it's just a matter of time before the stress finally ebbs and I can get back to normal.

However, the point to be made is that with the end of the year upon us, and a new year just around the corner when we can get a fresh start, it's time to start clearing the weeds out of our gardens. Weeds are toxic people who are holding us back. They are choking the life and health out of us. And there's no reason to keep them around if they are no longer a constructive, positive force, especially if they never were to begin with.

I recently told a very dear friend of mine over lunch that from time-to-time, we need to pull weeds out of our lives to keep ourselves healthy. Sometimes those weeds are small, and at others, they're deeply entrenched, having spread through the soil like crabgrass or ivy, choking off everything else. As with a garden, when we pull those weeds, the soil will be disturbed for a while, and the bigger and more established the weed, the more disturbed the soil will be. But eventually, the soil settles again, freeing the good plants to grow healthier and stronger once more.

Right now, my soil is definitely disturbed, because my ex-partner had become deeply entrenched in my life, and I am living with a load of regret I didn't end the partnership sooner. But the weeds needed to go if I was ever to become healthy again, and it's better that I ended the relationship later than not at all. Hopefully by New Year's Eve my soil will begin to settle again so that 2013 can see a lot of healthy growth.

Thank you for being here this year.
-D

P.S. I may not post much between now and the end of the year as I continue sorting things out over what happened with my ex-coauthor, and as I get ready for the new year. I hope all my readers bear with me through this, but I've realized that my posts have become more negative over the weeks since all this with my ex-partner came to a climax. My deepest apologies for that. That's not what I want to take into 2013, so I need to reboot my brain and clear out the rest of the weeds. Much love. XO.