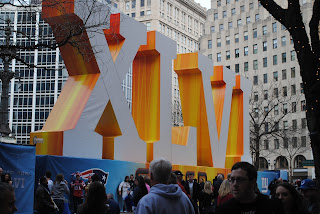 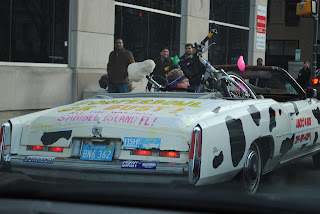 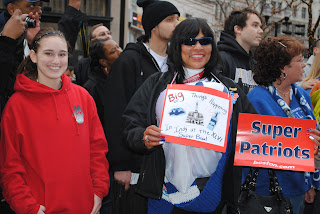 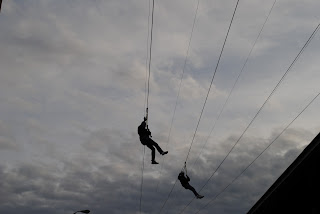 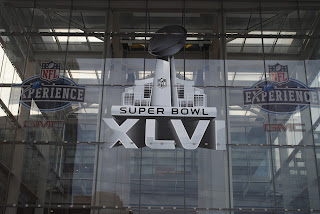 We also knew traffic would be unforgiving.  While sitting in a temporarily gridlocked intersection, my husband started chuckling.  What? I asked.  This car coming up behind in the other lane, he said.  I turned and saw a Cadillac convertible circa 1970s with a giant pair of bull's horns as a hood ornament.  The Caddy was painted like a dairy cow - white with black spots - and a bike stuck up out of the back seat.  As he passed,  the sign securely taped to the trunk said, "Super Bowl or Bust - All the Way From Sanibel Island, FL."  He was quite the attraction as every person on the sidewalk gawked, pulled out cameras and phones, and started taking pics.  Some people talked to him.  One guy was so taken by his car he actually rain into it.  I don't know how he did that.  I didn't see it, but my husband did and started laughing at the guy.

Once we were out of the gridlock, we backtracked to a $20 parking garage, then hoofed it to the Circle in the heart of the city.  Generator exhaust assaulted us from a half-dozen food trucks setting up for the night, but onward through the gas smell we trekked until we came to the giant numerals on the south side of the circle.  They light up and two of them become odd-shaped TV screens at night, but it was too early for that.  Still, it was awesome to get pics of them and then stand within breathing distance of the Fox 59 Live at Five newscasters as they did a broadcast.

Watching the newscast was a woman who had stuffed what appeared to be giant balls or balloons in her shirt and had a sign on that read, "Big Things Happening in Indy at the XLVI Super Bowl."  She was a Patriots fan, so . . . next!  (We don't do Patriots fans well here in Indy - LOL)

We wandered down to Georgia Street, where Super Bowl Village was.  The city had brought in large outdoor heaters to keep the Village warm, but Mother Nature made sure to let us know that was a budgetary mistake by granting us with the best weather I think we've ever had in Indianapolis this time of year.  It was 60 degrees yesterday afternoon.  Um, sub-zero is the norm in February.

En Vogue was performing and the crowd was body-to-body all up and down Georgia Street.  We turned west and headed toward Capitol, where the famous zip line had been set up.  Apparently, no other hosting city has had a zip line and it was THE BIG attraction.  Four zip lines ran the length of the road for about three city blocks.  People flew down upside down, sideways, or just clinging in fear to the line, but it was fun to watch.  The zip lines didn't open until 3:00 p.m. but it's so popular, the line started forming at 7:00 a.m.  Wow.

Celebrities were everywhere, but we were downtown a bit too early to see them.  They were getting ready for their parties while we were sight-seeing, but on the news later, we heard reports of sightings of Will Smith, Ice Cube, Tebow, Patti Labelle, Alec Baldwin, and many more.  I certainly saw enough moneyed females in fur, gold, and model-worthy digs that I have a feeling I did see some celebrities, but just didn't recognize them.  I saw one girl who looked like J-Wow, but without an entourage around her, I doubt it was.  Still.  Just wow.  Oh, and I don't know what some of these girls are smoking to want to wear four-inch, bright turquoise platform heels to walk a few miles on hard concrete, but hey, to each their own.

Speaking of smoking: we walked through a cloud of obvious weed smoke at one point.  The guy next to us said, "Oh!  I smell weed.  That smells good."  LOL.  Personally, I hate the stuff, but I laughed at the guy, anyway.  The atmosphere was just too awesome to have a sour puss about anything.  What's funny is I HATE crowds!  I avoid them like the plague, but enduring this crowd was 100% - no, 150% - worth it!  I was uplifted, even when I was shoulder-to-shoulder with people as we did sardine action through a bottleneck in the crowd.

Hubs and I made our tour, smiling great big most of the time, because really, it was impossible not to smile.  I was (and am) proud of how Indianapolis is pulling off hosting their first Super Bowl.  I actually turned to my husband at one point and said, "I am so proud to be a Hoosier right now."  And then we strolled back to the north, toward the parking garage and out of the magical wonderland of Super Bowl 46.

Way to go, Indianapolis!  Oh, and GO GIANTS!
Posted by Donya Lynne at 4:43 AM