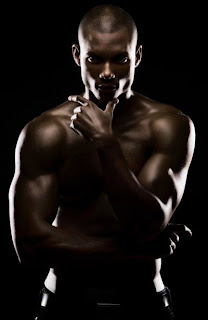 Meet Traceon. Profession: enforcer at AKM (All the King's Men). Sign: He's not saying, but I'm guessing Scorpio because he is so potent, and he's loyal to a fault.

This is the image I use when I am writing Traceon's scenes. He is a bad-ass mixed-blood vampire with a shitload of special powers in his arsenal that go beyond anything the others on the AKM team have in their bag of tricks. His father was a vampire, and his mother was rumored to be a human Jamaican "witch," so that might explain it. Whatever the case, he is one male you don't want to mess with, and he is a severely troubled soul under his poised outer shell. I love him. My beta readers love him. I hope you will, too, once you meet him in Rise of the Fallen, which I am hoping for a release in mid- to late-March. Stay tuned.
Posted by Donya Lynne at 7:37 AM

Email ThisBlogThis!Share to TwitterShare to FacebookShare to Pinterest
Labels: MondayMuse