Passive Voice vs. Passive Verbs - There is a Difference

As a writer wanting to learn more about passive vs. active voice, it's pretty disheartening to buy a book that is supposed to address just that, only to find out the book has mistakenly identified weak verbs as passive voice. But that's exactly what's happened. Which set me on a mission to differentiate the following terms from one another: 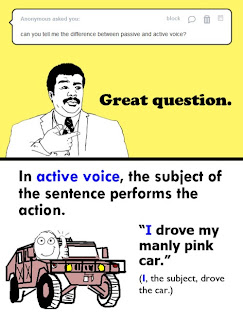 Okay, pretty simple, right? Here's where the passive/weak line blurs. See that "be" verb, "was"? You might have learned "be" verbs as "linking verbs" in school: am, is, are, was, were, be, being, been. These verbs are also known as passive verbs. Oh holy hell, right? Now we've got passive voice and passive verbs. Lions and tigers and bears, oh my! Many writers think that any time a passive verb is used, passive voice automatically results and should be rewritten into active voice. They have mistakenly been taught this concept, and they have mistakenly continued to teach it to others (me included), until massive amounts of writers now wrap themselves around trees in order to eliminate the word, "was" because they think it's passive voice, when all it really is is weak writing.

So, let's call passive verbs weak verbs and active verbs strong verbs. If you do that, you won't be as likely to confuse passive voice with simple weak verb usage. Here's the new and improved list of terms: 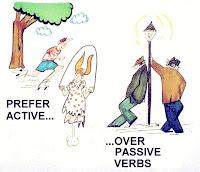 Eliminating all "be" verbs is not only impossible, but silly. As I just pointed out, "be" verbs aren't always passive. Most of the time, they are just weak. And more often than you might think, weak verbs are acceptable, because sometimes you don't need a stronger verb. Sometimes you simply need to write, "I was sick," not "I succumbed to the flu," which would come off as too formal, depending on context. Let's look at some examples of active voice that is weak vs. active voice that is strong. Note the italics, which point out the weak or strong construction. Again, all the below sentences are written in active voice, despite the "be" verbs.

Active but weak: Micah was fit to be tied after being accused.
Active but strong: Micah fumed at the accusations.

Active but weak: Trace was ready to be flogged.
Active but strong: Trace sank to his knees, head bowed. The hair on his arms prickled, and he licked his lips. Any second, the strike of leather on his back would relieve the ache in his chest.

In the examples, weak verbs (not passive voice) were replaced by stronger verbs. The weak sentences were still written in active voice, but they suffered from weak construction. By replacing the weak verbs with strong verbs, we strengthened the sentences while keeping them in active voice.

See the difference between passive voice and weak verbs?

What made me begin to question the concept of passive voice (because I had been taught the incorrect way to identify passive voice and generalized "be" verbs as always passive) was judging entries for my local RWA chapter's annual contest. As I pointed out what I thought was passive voice in some of those entries, I began to question whether I was right. I don't know what it was, but something didn't make sense. So, I began to dig for more details about passive voice, and stumbled upon Paula LaRocque's book, The Book on Writing, where she clearly differentiates between passive voice and weak verb usage. A-ha! That's when I realized I had been taught wrong.

Weak verb usage does not necessarily mean passive voice. This is important to me, because as I continue to judge and critique others' work, I want to make sure I'm providing quality, concise feedback that not only helps but teaches. And I can't do that if I'm not using proper terminology. There is a difference between telling someone their writing is passive vs. weak. A big difference. And while "be" verbs may not always indicate passive voice, they usually indicate generally weak writing that can be improved with stronger, more precise verbs.

Oh, and don't forget: There is a place for passive voice and weaker verbs. You can't completely eliminate both, and you shouldn't. But you should certainly watch out for both and eliminate them when you can, and when it's appropriate.