What To Do When Your Novel Isn't Speaking To You 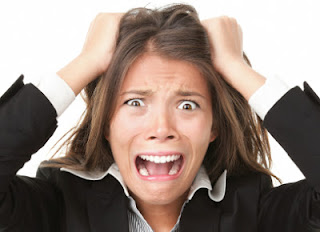 On Facebook yesterday, I saw a post by another author where she voiced her frustration over how she couldn't seem to trudge through her edits. She had been reading the same three paragraphs for three hours, unable to make any progress.

Man, do I feel her pain, as I'm sure all writers do. It's the nature of the beast to fall into periods of low or even non-existent productivity, and when that happens, it's easy to fall into a panic, seeing the time slipping away as your deadline looms ever-nearer. (NOTE: Even indie authors should assign themselves deadlines; otherwise, it's too easy to poo-poo away that slipping time with a wave of the hand and a flippant, "I'll get to it eventually.")

So, how do you handle these potential time-bombs of panic? When the story just isn't working?

Before I talk about how I handle them, I'd like to share where I think some of these low-or-no productivity periods come from.

I have learned from experience that when a story isn't "talking" to me, whether through the draft phase or the editing phase, or when I'm struggling with a manuscript, it means one of two things:
For example, In Rebel Obsession, I struggled to like Miriam and portray her in a positive light. In the first draft, she came off like a spoiled, self-obsessed brat. Ugh. I wrung my hands and gnashed my teeth. What was wrong with her? And why wouldn't she talk to me? Every time I asked her why she was the way she was or what she wanted, she said, "I don't know." Double ugh! And then one day the light bulb went on. She really did not know. As soon as I realized that, she rejoiced inside my mind. I got it! I finally got it! That was the angle I needed to portray her from. Once I understood her, I was able to portray her correctly as a confused, rebellious character who was struggling to figure out where she belonged in a world where high expectations that she didn't want and had no idea what to do with were placed on her. She simply did not know what she wanted, because she had been sheltered all her life. Hence the source of her problems. She wanted to break free and figure herself out.

Long story short: As long as I am listening to and understanding my characters, the story flows out of me. But as soon as I start trying to force my will, the story shuts down.

This happened in my latest work, Return of the Assassin. I went into the preparation with this story holding high hopes. The characters had powerful stories to tell, and the passion between them was smokin'. And then I started worrying about word-length. My last book in the series clocked in at 115,000 words. The one before that was over 80,000. The one before that: 60,000. So, I decided I needed this book to be around 90,000 words or more. Next I began to worry about all the side characters. I needed to work Trace into the story, because fans love him. So, how was I going to make Trace a part of this book so that it worked? And then there was my new character, Maddox, Trace's father. I needed to work him in. Oh, and then there were the other new characters: Kieran, Tully, Searcy, Lorena, and Savill. And then I needed to make sure to mention Brak, another new character who is pivotal to the ending of the book, as well as future books. Oh, and let's not forget Apostle and Bishop, Grotek and Chane, and, and, and.....AAAAUUUUGGGHHH!

Before I knew it, Return of the Assassin had shut down. Not a peep for weeks. Panic set in: "OMG! Why won't the book talk to me? My deadline for the draft is the end of March, but the story won't even whisper right now! How will I finish it in time to release the book by September? Oh, despair, despair!"

Now we come to where I answer the question: What do I do when a story is no longer speaking to me? Maybe my methods will help some of you overcome the same writer's block.

In the case of Return of the Assassin, I set the book aside and worked on other projects for a few weeks. This let the manuscript simmer in my subconscious where I could work out the issues without really thinking about them. A couple of weeks ago, I picked ROTA, as I call it, back up and started trudging through it. I began editing even though the writing phase wasn't over, which is something I rarely do, because, in my opinion, a writer should never start editing before finishing the writing phase. It's too easy to fall into a self-defeating loop of continual edits and rewrites without ever getting to the end of the manuscript.

But in my case, I needed to figure out where the story had gone off track, so I started rewriting. But the more I rewrote, the more desperate the situation seemed to become. The characters just weren't talking, and I was becoming very upset. I mean, what I was rewriting was better than what was there before, and the changes strengthened the story by leaps, but I was suffering to pull the story out.

Then one morning, I was getting ready for work and said to my characters, "Okay, what's wrong? Why isn't this working?"

As I worked through a dialogue with the characters, they stripped me down to the basics of what was important in the story. Within twenty minutes, my problem was solved. My main characters, Malek and Gina, showed me how their story had become everything but their story. I would have seen this in edits, but it was so much nicer to see it now, so I could save myself a lot of time and aggravation.

So, my worries about word length? Gone. If the story comes in at 60,000, then so be it. I'd rather have a wham-bang, kick-ass story at 60,000 words than a so-so one at 120,000. Trace? Sorry, but he's out. I know fans love him and want him, but his book is next, and the scenes I wanted to include in ROTA that focused on him will better serve his book, not Malek's. He might get a tiny mention, but that's it. Kieran and Tully? Gone from this book. Searcy, Savill, and Lorena? They stay, because this story depends on them. Basically, I stripped out anything that had nothing to do with this story, and pumped up Malek and Gina into powerful leading characters, ripe with emotion and inner turmoil, who have brought me to tears numerous times as I write. As a result, ROTA is flowing again, and Trace's book is already off to a fabulous start because of all the Trace scenes I removed from ROTA. So it's a win-win, with a bonus: I will blow my completion date of March 31 out of the water by over a month, and will finish ROTA's draft within the next week, maybe two at the most. What that means is that I will be able to release the book sooner than expected, and that I can start Trace's book sooner than expected, too.

All because I pulled my ego, influence, and personal desires out of the equation and let the characters take charge. It's their story to tell, after all.

In summary, here's how to help get you back on track if you've fallen off of it (I use each of the following methods to help break me through plateaus):
Writing is work. It's not supposed to be easy. And like with anything we do in life, sometimes we are just not in the right frame of mind to write. We get into moods: I feel like seeing a movie; I feel like Chinese for lunch; I feel like taking a nap; I feel like going for a walk; I feel like taking a day off...and yes, I feel like not writing today, or this week, or whatever. And that's okay. Because in time, you WILL feel like writing again. And in time, the stories will begin talking again, too.

Does anyone else have other suggestions for breaking through plateaus? Please add them below in the comments.