Passive vs. Active Voice - The Most Effective Tip I've Ever Read

I read a lot of writing books so I can hone my skills. The latest book is The Curious Case of the Misplaced Modifier - How to Solve the Mysteries of Weak Writing, by Bonnie Trenga. 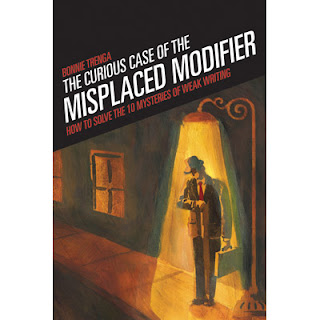 The first lesson in the book was about detecting and correcting passive voice, and this was probably the best example of attacking passive voice I've ever seen anywhere. Let's break it down:

That last one is a dead giveaway in my opinion, and I'd never heard that the word by was a passive identifier. At any rate, let's continue with the lesson.

NOTE: the word had was not specifically called out as a dead giveaway for passive voice. Some people have tried to teach this to be the case, and preach about eliminating all occurrences of the word had from your manuscripts. I have a friend who was told to do this, and God love her, she was in fits over it. You can't eliminate the word had 100% of the time. I've tried. But as a writer who uses past tense as the present (Micah looked at Sam with love in his eyes. He welcomed her into his world, ready to be her mate and a father to her children until the end of time.), when I need to dig my characters further into the past, the only way I can do that is with the word had (Micah had welcomed Sam into his world six months ago, and now she was his forever.). To eliminate had altogether would confuse readers as to what time period I'm referring to, present or past. Sometimes had must be included. It is not automatically passive. An example of had as passive: A good time was had by everyone. Active: Everyone had a good time. See, had is in both sentences, but one is passive and one is not. The active sentence may not be the most interesting sentence, but it is active.

Back to English 101, an active sentence is one in which the subject performs the action and the object receives it:

The cat attacked the dog.

If you turn the object of this sentence into the subject, you create passive voice:

The dog was attacked by the cat.

Ouila! Instant passive voice. Do you see all our clues in that sentence? We have a form of the verb to be (was), a past participle (attacked), and the word by. In this sentence, you have taken the action away from the perpetrator and loaded it onto the recipient.

In school, I remember lessons in English class where we were taught to invert our sentences to make them more interesting. Obviously, these lessons weren't directed toward clear and concise writing, because with just this one quick lesson in Ms. Trenga's book, I learned that inverting a sentence to put the object first is a big no-no in the writing world. This is the most effective tip I've ever read about identifying and correcting passive voice.

The football was kicked by the punter.

How could you make that passive sentence active? Let's flip it around and attribute the action to the subject:

The punter kicked the football.

Sometimes a passive sentence will contain all three of our passive elements, but sometimes not. The only element that will always appear in a passive voice is the past participle. Let's look at a few more examples.

Passive: The radio was turned on to drown out Tom's snoring.

Here, the word by is missing, but this is still a passive sentence. Additionally, a subject is missing, which is one of the bad side effects of passive voice: it allows you to eliminate the subject. We don't know who turned the radio on here, do we? The radio sure didn't turn itself on, right? This makes the sentence unclear and vague, as well as passive, and writers should always strive for clear writing, so by eliminating passive voice, clarity will naturally follow.

Active: Kimberly turned on the radio to drown out Tom's snoring.

Here's another example from the book, and this gets a bit trickier:

Passive: Driven to the crime scene, the psychic led police to a viable suspect.

We don't have the word by or a form of the verb to be, but this sentence is still passive. Furthermore, it is extremely vague. This sentence could confuse readers. Did the police drive the psychic to the crime scene, or did a vision lead her there? Making the sentence active clarifies this.

Active: After a dream drove the psychic to the crime scene, she helped police identify a viable suspect.

Why You Should Avoid Passive Voice
Besides the ambiguity it creates, there are three other reasons for eliminating passive voice:
Here's a sample to illustrate all three points:
Someone who looked like the suspect was rounded up, but he was released after his alibi was checked out.
(no subject, lots of was verbs, and wordy)

Here's the same sentence, only active:
The authorities rounded up someone who looked like the suspect, but they released him after checking out his alibi.
(we have our subject, authorities; we've eliminated was, and the wordiness has been replaced by clarity and a more visual representation.)

When It's Okay to Use Passive Voice
You can't eliminate all incidents of the verb form to be. I've heard people say that they need to eliminate all occurrences of the word was, but that's impossible. Sometimes you need am, is, are, was, were, be, being, and been. The only time you should strive to eliminate it is when it is creating passive voice in conjunction with a past participle and the word by. Just because you write, What was he going to do? doesn't mean you're automatically passive because you used the word was. This could just be a character's internal dialogue.

I guess what I'm trying to say is that you shouldn't become obsessive about eliminated all incidents of a given word just because some text somewhere said it could contribute to passive voice. It could, but that doesn't mean it does 100% of the time.

So, when else is passive voice okay? Well, when you've made a conscious decision to use it for effect:

1. You want to focus on the object, not the subject.
The piles of snow, which had aggravated Florida residents for days, finally melted.

2. You don't care who did what, it's obvious who did it, or you don't know who did it.
The department's new policy states that only candidates with police training will be hired.

3. You intend to omit who did what.
Mistakes were made in the investigation.

In my latest book, Rebel Obsession, I included intentionally passive voice in one of the early chapters because I didn't want to reveal one of my characters, yet. I wanted to keep him in the shadows for a few pages until I was ready to announce him. This is one instance where passive voice is okay to use, because it's being used for a specific purpose.

I hope this helps all you writers out there.