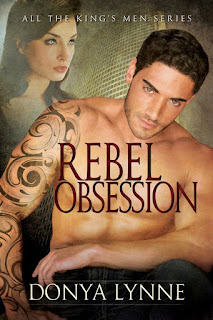 My next novel in my All The King's Men series is due out in January, and it's time to unveil the cover and blurb on my blog! Woot!

Former cobalt addict and AKM drug counselor, Io is a male vampire known as much for his abrasive personality as for his playboy lifestyle. In other words, he's not the likeliest to make friends and settle down. Life on the edge suits him, and he lives full throttle, making his own rules, and damn the consequences. What he wants, he takes, and what he wants now is Miriam. If only he can find a way to see her again without getting himself killed, but her father stands in the way.

Miriam is the daughter of the king. Strong-willed and defiant, she feels like a prisoner in her own home and struggles to break free from under her father’s oppressive hold. The king’s law surrounding Miriam is explicitly clear: No one touches her. Period.

In a fit of rebellion, Miriam has turned to cobalt to find relief and freedom, but now she’s a prisoner to addiction as much as to her father’s strict control. What's more, she can’t get sexy Io, who tended to her so gently as she recovered from her first overdose, off her mind. Will she ever see him again?

When Miriam overdoses a second time, she and Io are thrust back together, and all bets are off. Seeing each other was the one thing both wanted, and not even the king’s laws and threats of punishment will be enough to defuse their rebellious obsession with one another now that they’ve found each other again, even if the consequences are death.

Author’s Note: As we follow along with Io and Miriam, new and old enemies begin to emerge, and we get a glimpse of their deranged plans for the vampire race. Traceon’s story continues to develop as new characters are introduced who have had, and will have, a profound effect on his life. As usual, Micah is a dominant force, because…well…it’s Micah. Need I say more? I hope you enjoy this new installment to my All the King's Men series, due out in January, 2013. –Donya Lynne

My thanks to cover model, Zach Tesar, and Joem Bayawa Photography in Chicago. Love, love, love their work!