How Do You Begin Your Story? 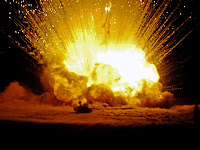 Probably one of the most vexing decisions for an author starting a new book is, "Where do I begin?" The opening of a book is considered make-or-break, so you want to get the beginning right. And getting it right means gripping the reader by the proverbial testicles and not letting go for the duration of at least the first chapter, but preferably the entire book, if possible.

When a reader says, "The story captured my attention from the first word and I couldn't put the book down until I finished," you know your beginning was effective.

So, what makes a good beginning? How do you decide where to start your story? My answer has two parts. Let's begin with part one:

Think about it. In that race, everything was status quo as long as all the cars were zipping along, but as soon as change occurred and one car went off track, KABOOM! Action! And the audience both in the seats and at home were on their feet, leaning forward, holding their breath.

So the answer to where to begin your story is during a point of change.

It doesn't have to be a point of big change. The change could be small or internal, but with big consequences. Here are some examples of points of change, big and small, where you could start your story:

I could go on, but the point to remember, regardless of whatever point of change you open your book with, is to make sure the beginning coincides with the story. If the main plot of your story is about a character who goes to war, then starting the story with a diagnosis of cancer probably won't work. In other words, if the beginnnig of your story has nothing to do with the main plot and what happens in the end, you're going to confuse (and maybe piss off) your readers, and your story will come off disjointed and sloppy. Why is that? Because—and this is part two of the answer about how to begin your book—a reader should know within a few paragraphs, or at least by the end of the first chapter, what your book and subsequent ending is going to be about. The joy for the reader is in watching the characters get to the end they are expecting, based on the beginning.

I have a background in business, and I specialize in building presentations. The rule of thumb with presentations is: Tell your audience what you're going to tell them (intro); tell your audience what you came to tell them (body); tell them what you've told them (summary and conclusion). You do the same thing in works of fiction, just in a different way. You still have an intro, a body, and a conclusion, and all three parts must relate to one another. If they don't, your message isn't cohesive, and you will confuse your audience.

A couple of examples of books that went way wrong with their beginnings and how readers reacted:

I recently tried to read a story that I had heard good things about. The first 10% of the book (the intro) focused on Character A and his attraction to Character B. But the story was supposed to be about a romance between Character A and Character C, who the author didn't introduce us to until around 15% in, and who, at 50% in, still wasn't clear would be the character that A ended up with.

Furthermore, this book did not start at a point of change. It started with Character A and two other non-crucial characters having lunch. Lunch, lunch, lunch, lots of conversation about Character B, and then Character A going about his daily routine. No change whatsoever. It was boring as hell. The only reason I kept reading was because other people had said the book was good (but I wasn't seeing it at all, making me wonder if these other people were just friends of the author trying to tout her book for her). After the blah beginning, the story led me down every road EXCEPT the one the story was allegedly about: the romance between Character A and Character C. I ended up ditching the book at 50%, unable to read another word because I was so frustrated. I mean, I don't want to have to wait until the end of the book to read about the blossoming relationship between my destined-to-be-together main characters.

Another book I fortunately only read the free look inside (on Amazon) and several enlightening reviews of started off with a great point of change: A soldier coming home from war and bumping into an old friend from high school he'd had a falling out with and had been attracted to. Bravo! Excellent beginning. Let's get ready to watch these two work through their conflict with one another and hook up. Unfortunately, the beginning of this book, as well as the body, had nothing to do with the real story, which was about the soldier developing a romance with a completely separate character at the end of the book.

Based on the very-pissed-off reviews of several readers, the majority of the book focused on the soldier and his old friend, making you think they were the ones who were going to hook up, and then SURPRISE! Sorry, but the old friend is going to be a non-entity at the end of the book and the soldier is going to wind up with someone else. Say what?

This was a major fail, and readers made sure the author knew how they felt (a couple of those reviews were damn ugly). As a romance, this story should have been about the relationship between the soldier and the guy who gets him in the end, but the story we got wasn't even about them. It was about the soldier and his friend, who, from the reviews, wasn't even part of the ending. Unfortunately, even the blurb of the book makes you think the soldier and his friend are going to hook up, so what was this author thinking?

Perhaps the author thought she was being clever, I don't know, but she committed a cardinal sin: She disregarded her readers. Never, never ever, bait your readers into thinking XYZ is going to happen when you intend to give them ABC instead...unless you want to piss off your readers. And pissed off the readers were.

Please learn from the mistakes of these authors, and don't make them. Keep the main plot and the real story first and foremost in your mind, and if your opening or any scene within the body has nothing to do with the main story, cut it or rewrite it so that it does. It doesn't matter how clever the scene is, or how well written, if it doesn't contribute to the main story, cut it. I've had to cut many a fabulous scene for this reason. But just because it's a fabulous scene doesn't mean it's fabulous for the book I'm writing, which takes priority. The main story comes first; the scenes and opening should contribute to the main story, not detract or lead the reader away from it.

First and foremost, always remember who you're writing for: The READERS. They don't care if YOU like your story. They only care that THEY do. Readers, particularly of romance, don't appreciate the bait and switch, or being led down a stray path only to be slapped in the face with a red herring, which is disrespectful of their time and money, as well as insulting to their intelligence. Furthermore, like it or not, readers want the happy ending, particularly in romance. They want the conclusion you have promised them in the beginning and body of the book. And if the beginning and body have been about XYZ, if you give them anything but XYZ, be prepared to suffer the readers' wrath.

So, find a point of change, open with that, and guide your readers to your conclusion through cohesive, plot-aware writing that maintains the integrity of your opening, and you'll be on your way to a well-received book.