I'm in the final stages of preparing my next manuscript, Rebel Obsession, to be released on January 15th. I've edited, given the book to my beta readers, edited, edited some more, and now I'm proofreading. 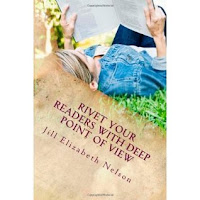 So, what's wrong? Nothing really, except that I went and read a new writing book called "Rivet Your Readers With Deep Point of View," by Jill Elizabeth Nelson. Excuse me while I hang my head and plant my palm over my face.

Why, why oh why did I go and read a writing book at this stage of finishing my manuscript? I'll admit that I was researching POV for a series of blog posts I want to write, but don't I know myself well enough by now to know that I'd be so motivated and inspired by the words of wisdom in this book, especially, that I'd want to go back to my manuscript and tear it to pieces as I thought of new and better ways to convey the scenes in the story? Apparently not, because silly me, I read said book, and now I'm in a mad dash to liven up areas of my manuscript using the new arsenal of knowledge this book taught me.

Not that the manuscript was flat. My beta readers loved it, and my editor said that Rebel Obsession is her favorite story in the series so far, but now that my mind has been stretched with this new knowledge of Deep POV, I can see where my story can be even better. Granted, I do have a tendency to write in Deep POV anyway, but this book taught me how I can go even deeper. And in this case, deeper is definitely better.

This small book—a handbook really, at the length of only sixty pages—teaches you all you need to know about this somewhat-elusive POV and writing skill. And, yes, most definitely, writing in Deep POV takes skill. I thought I was doing well before, but even I'm struggling to fully grasp how to change my shallow POV areas to deeper ones.

Okay, so what's the big deal about Deep POV and why should every fiction writer know about it and strive to utilize it in their manuscripts?


Here are the highlights:

By its very nature, Deep POV takes your narrative to "showing" rather than "telling," and as writers we all should know how important showing the story over telling it is.

Deep POV is more respectful of your readers' intelligence than Omniscient POV, where every little thing is explained to the reader from a distance, and which by its nature is "telling" rather than "showing."

Deep POV creates first-person intimacy when writing in the third-person, so hooray hurrah!

"Author intrusion," where the author consciously or unconsciously inserts an invisible narrator between the character and the readers, is removed by use of Deep POV.

What is Deep POV?

As quoted on page 17 of the handbook, this is one way to look at Deep POV: "The narrative should read like the thoughts going through the character's mind but without the need to italicize as in direct thought quotations."

Sounds simple enough, right? That's what I thought. I was wrong. There is an art to writing Deep POV, as I've found, and the skill has to be acquired through lots and lots of practice, as I'm also finding.

Another way to think of Deep POV is that it keeps the story/character/reader firmly rooted in the now. It's great for high action scenes and for taking a trip into a character's psyche during a contemplative moment; however, Deep POV is not where a character goes on "nattering" to himself endlessly about things that don't propel the story forward or that have nothing to do with the action taking place.

Okay, let's get to the nitty gritty. Maybe the following four sections will break Deep POV down in a more understandable way.

Phrases and Words that Scream "Shallow POV" as Opposed To Deep

In all the above examples, as Nelson points out in the book, a narrator is required in order to say that a character knew/felt/thought/wondered/etc. something. In our own minds, we don't think like that. We don't say to ourselves, "I think the wall looks dirty." We think, "The wall is covered with dirt. Who did that?"

More examples, borrowed from the book:

Shallow: "She wondered how she would get through the next day."
Deep: "How could she possibly survive the next day?"

See how we transport more fully into the character's head with the deep examples? Don't you feel more involved? Maybe even more emotionally vested? Because you can identify with the Deep portrayal better than the Shallow one, because Deep is how we, ourselves, think.

Shallow: "Noxious fumes filled the air."
Deep: "Was that sulfur? Her nose scrunched and she pinched her nostrils closed with her thumb and index finger as she held her breath." [it's pretty clear the fumes are indeed "in the air." There's no need to tell us that.]

Shallow: "He couldn't help but to wonder how Jessie was coping."
Deep: "How was Jessie coping?" [Notice that "couldn't help but to" naturally wants to precede one of our to-be-avoided terms, such as feel, wonder, think, realize, wish. So, by removing the offending phrase, you also remove teh offending term and make the sentence fall into deep POV. Additionally, the deep example automatically implies that he is wondering and that he couldn't help himself from doing so. There's no need to tell the reader those things.]

When you see these phrases, you're telling, not showing. You can go deep to remove most, if not all, occurrences of these phrases and more effectively engage your reader.

The Five Senses...If You Tell Us the Senses, You're Not Deep Enough

Here's another list of phrases/words to remove from your manuscripts if you want to go deep:

These are called sensory tells. Key word: tells. Guess what you're doing when you use them. That's right, you're telling. When you use these in your story, you're inflicting narrative distance again, pushing your reader away from the action and the character. Think of it like this, when you drink spoiled milk, do you think, "I'm tasting spoiled milk."? No, you probably think, "Ew! Yuck! How old is this milk?" That's how you want to think when you're writing Deep POV.

Avoid Naming Feelings and Emotions If You Want to Go Deep

Much like in the phrases above, naming emotions and feelings for your characters also puts readers at a distance and interjects a narrator's voice.

Shallow: "Tony closed his phone, frustration and fury surging through him."
Deep: "Tony slapped the phone shut. If steam could escape his pores, he'd be a toxic cloud."

See the difference? Nelson does a good job showing us in this example from her book exactly how we can portray frustration and fury by taking us inside the character instead of just telling us the character is frustrated and furious. Did you catch that? Telling. A narrator tells us that Tony is frustrated in the shallow example, but Tony himself shows us how he feels, which conveys his frustration naturally, in the deep example.

Another example from the book:

Shallow: "Hot jealousy flashed through me."
Deep: "Heat boiled my insides. If that wimp could win a trophy, where was mine?"
Any and all emotions and feelings can be inserted for "hot jealousy." Joy, happiness, sadness, anger, despair, terror, fear, aggravation, boredom. Happiness flashed through me, sadness flashed through me, terror flashed through me. *YAWN-boring* But when we go deep, each Deep POV, showing method will be unique: "The moment I saw Jeff emerge from the burning house, my body relaxed and I looked to the heavens, tears trailing down my cheeks. He was safe. My husband was safe. Thank God." "The air grew heavy and my body wilted as if the act of staying upright was too much work. Someone was talking, but I couldn't hear them. Jeff? Dead? He hadn't survived? Had I heard the officer correctly?" "My skin prickled and I searched the darkness, my breath locked inside my throat. 'Who's there?' Someone was watching me. Someone evil. I could feel it."

A derivative of the previous section is the prepositional tell, where a preposition precedes the naming of an emotion, attitude, or thought. Examples: "...of happiness," "...with excitement," "in need."

As with the previous section, remove the prepositional phrase and replace it with a deeper description from within the character's POV.


Is going deep easy? No, but it's not hard, either, and it gets easier the more you do it. Using Deep POV takes work, and my suggestion is to write your first draft without even thinking about it and go deep in the editing process.

Furthermore, a first draft should never, NEVER, ever be what you publish. In fact, the first draft should only marginally resemble the finished product if you're editing correctly. Unless, of course, you're a professional author who's been writing books for the big leagues for twenty years. But then, if that's the case, this blog isn't for you. :)

Once you've brain-dumped your manuscript in the draft, you're ready to edit. Manipulating and correcting your manuscript is what edits are for. This is where you will go through and find all the offending shallow phrases pointed out in this post and correct them to be deep. As you do this more and more, you'll get better at including Deep POV in the draft stage so that it becomes more of a natural way for you to write. But reaching that stage could take years...although it will be worth it.

Be patient and never stop improving your writing.

Note: Examples and terminology used in whole or part from Jill Elizabeth Nelson's book, Rivet Your Readers With Deep Point of View.
Posted by Donya Lynne at 7:53 AM